We were installing a massive sump system in Lapeer, Michigan. There was a house on a river. When this river swells up, the water would back feed into a walkout basement. I’m going to show you guys what we did to keep the water out.

So the water keeps back-feeding off the river when the river swells up and it fills the basement with water. We start by digging out a big sump pit. It’s going to be a vault. It’s going to hold all the water. We’re going to have to start retaining it right from the bottom of the sump pit. We’re going to bring in some really big boulders. Also, we’re re-purposing some broke concrete that the homeowner had. So we mix that in with our really big, dense, heavy boulders and made a really nice retainment. 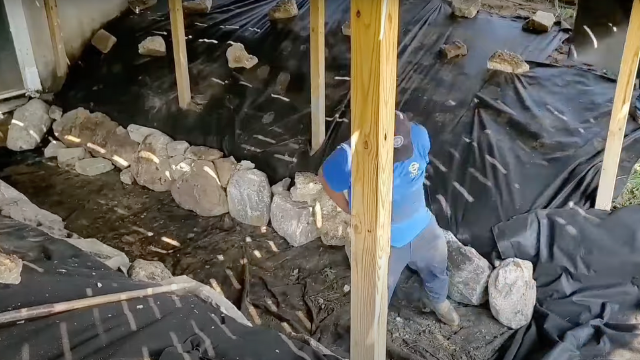 Francisco is setting up this duplex sump pump system. He’s taking two of our Bad Seed Sump Pump Systems. These are full frame, 24-inch, two of them, the one third horsepower bad seed, and he’s making a duplex. We take the exact same thing that we build and ship all over the United States, and here he’s just basically reconfiguring it on site because we added 10 feet of chamber along with a heater. Since we’re in the north, in Lapeer, Michigan we have to heat or units. So we have a thermostat controlled heater. 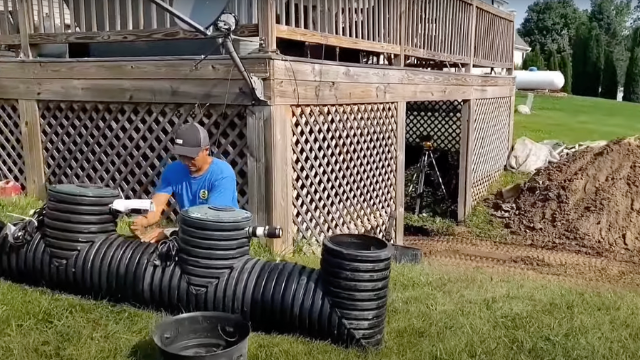 Now, the guys are going to take the filter fabric and we’re just going to put that filter fabric across the entire bottom of the stack. The homeowner can put decorative stone on it later.

It’s like a puzzle. Every piece is methodically placed. The guys pick each boulder one by one, as they bring them in and they need certain heights, and then they go ahead with some broken concrete that we’re repurposing that was here already and we’re locking that in place. We’ll take the big boulders and they’ll take some of that broken concrete and shove it in areas to where it just literally prevents it from moving.

Adding On Site Storage for Layers of Protection

So we’re going to put another chamber next to this duplex system. We’re going to be able to have so much on site water storage for this sump pump installation. If there’s a power outage and these pumps can’t run, and there is a big rain event, I want this to fill up and collect as much water as possible before it ends up finding its way into this basement. 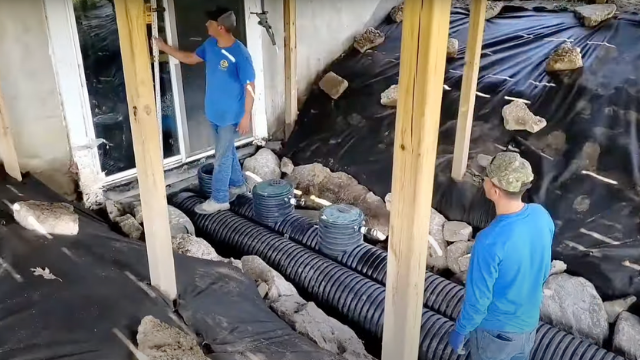 Another benefit of onsite storage is that it extends the sump pump life by decreasing the amount of cycles.

So let me talk you through the complete project. We just got done grading it. We took all that dirt, all 15 yards of that dirt that we dug out and we built a protective berm. You could see the guys put strong grass seed down there. I’ll get another look at that for you soon, but check this out. We got our duplex system and also the heater. So that is a duplex system for the north. Look how beautiful this came out. It came out really nice, really happy with the guys. So you can see that berm that we built. We repurposed the 15 yards of dirt that we dug out from underneath the deck, and we’re going to keep out this river. When we have flood events and that river swells up, it no longer can back up into this walkout basement.