We’re installing an outdoor sump pump in Chesterfield Twp, MI where the road is higher than the house. There’s a canal on this side of the road with the garage. This side we have the house and it’s on Lake Saint Clair. The water shuts off this road and floods the front yard. So, somebody put this in. This is an indoor sump system. That’s not going to work outside very well. What would happen is during hard rain events, it gets overwhelmed. There’s no way this is going to work during a torrential rain without the water backing up. It doesn’t give the water a place to go.  We create a chambered sump pump system made for yard drainage so that if the pump falls behind there’s storage so that you’re not flooding the house. 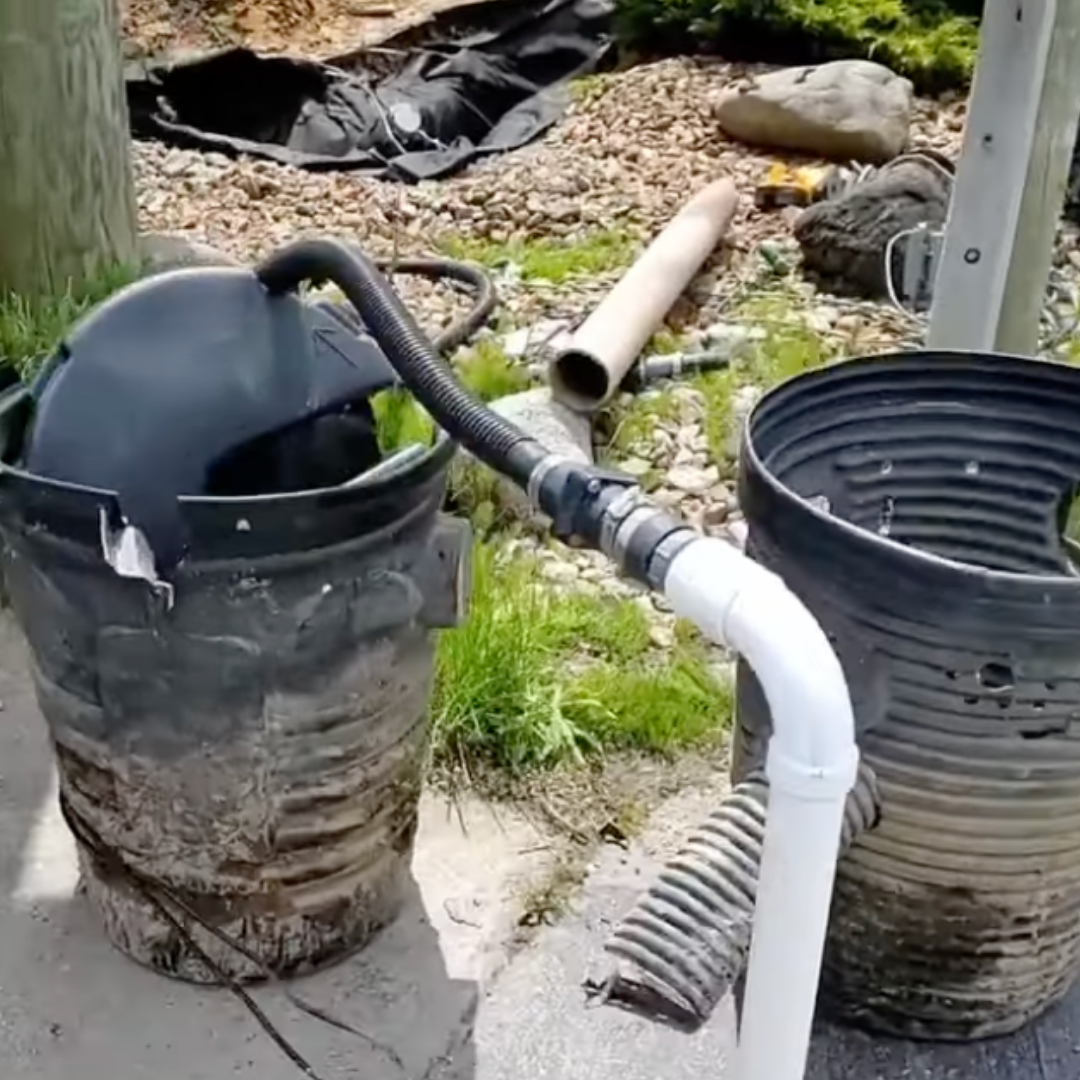 With this indoor sump pump that was previously installed, there’s zero room for error because the water is going to find its way and flood this house. So, this homeowner found us, contracted us to remove this indoor sump basin and put in one of our outdoor sump systems. Actually, this house has two sump systems going in.

So, this house is lower than the neighbors house. All this water, all the sheet water off this driveway, all the sheet water off the roof, all of it comes down in here. What we’re going to do ? I didn’t like the idea of pumping water from the front. So we’re going to keep digging deeper and deeper and deeper so that the water runs back here. Right here I want to put a bad seed  outdoor sump system with extra chamber lengths.

The homeowner, put this wall here because when the waves come over the seawall when the lake is angry the water just comes up over the wall. Temporary sump on the other side but we’re going to put in a 24 inch Bad Seed.

Now, always when you’re running two pumps always have a separate circuit.  If something happens where one of these plugs gets blown say a pump shorts out or something , you don’t want both pumps going out.  So even if I had a system where there’s two pumps right here side by side, I would have another plug that was on another breaker. You want to have them on separate breakers. That way if something happens to one pump, you’re not losing both pumps.

When you live in Chesterfield Twp on the water, there’s so many wonderful moments from the wildlife to the postcard like picturesque view from your very own couch or table. Unfortunately, there’re times where the weather is unfavorable. And when the winds kick up and they’re coming inland towards you, that’s when your number’s called. Lake St. Clair is not a very deep lake it’s shallow. So it really gets rough and the waves are two stories high.

So the homeowner, as you can see, they had this indoor sump system outdoors. It’s just never a good idea. It’s even worse when you live in Michigan with freeze and thaw.

What happens is when the ground freezes, it lifts these basins up.  So all they got to do is just move a couple inches and now the pipe that had like 1% slope to it, no longer can drain in it. So these are meant for the indoors. You’re supposed to pour concrete around them and that holds them down. But when you put these in your yard, most people don’t pour concrete around them. And then it results in failure.

Now, the other thing, the water table’s really high here in Chesterfield on Lake Saint Clair.  You could dig a hole that water in that hole, that’s the same height as the lake water. We shoot that with our laser, go over there, shoot it with our laser level money. So you’re just recirculating the water. We have to set these to the perfect height to where you’re not in the lake water just recirculating it. And the other problem is when you have a high water table, these basins are made out of a buoyant material. It’s going to push them up. They’re going to move up and they’re going to cause failure.

This indoor systems also has a very small chamber and five gallons of water is all it takes to turn on the sump pump. So you’re going to wear your sump pump out as a short cycling all the time. The chamber system that we put in, it allows you to put your stone on top of the chamber. It doesn’t move like the water table does not push it up. The frost can not push it up. The short cycling doesn’t happen anymore because now it fills. And it takes 30, 40, 50, a hundred, 200, 300 gallons of water to turn it on, depends on how much chamber you put on the system. So we’ll go through that and show you the install. Stay tuned.

If you’re looking for sump pump repair or replacement contact the industry experts who set the blueprint on outdoor drainage, French Drain Man. We are licensed builders with over 3 and a half decades of experience in everything yard drainage