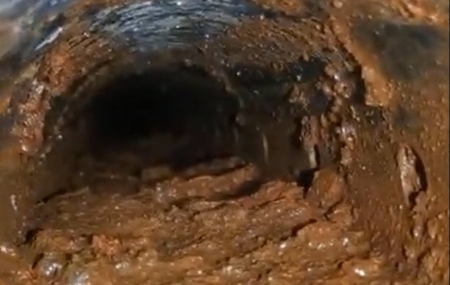 I wanted to show you a job where Scott and his crew were flushing out all the sump lines and the basement drains. Everything had iron ochre in it.

We run this one here. We’re using a high-pressure washer with a jet nozzle that pulls itself along and they feed it in to get all that iron ochre. Now iron ochre doesn’t discriminate and the reason why I’m telling you this, this is on a home that is over $2 million, so and it’s brand new. It’s only a year and a half up, so that’s how long it took to fill these pipes halfway.

This house was a pretty good size, so it had two sump pump lines and we had to clean both of them out. I’m going to show you some footage later in this video of, I put my phone down in a basement floor drain so that you can see all the pipes underneath this house. They were half full of iron ochre. Look at that is pouring into the creek behind the house. You know what else you’re going to do. There’s nothing you can do with this stuff.

We put them on a schedule, so now we’re doing this every three months for this homeowner. It’s a client of ours and we’re taking care of them. That’s the right way to take care of your floor drains a the tile around your house, your foot or tiles. Everything needs to be jetted. When you have iron ochre. If you don’t take care of it, it will plug and then once it’s plugged, it’s really, really hard to get a jet through it. I’ve seen cases where it was plugged to the point to where you had to jet up to the area where it was plugged solid and then cut that piece of the pipe out.

So you’ve seen me do the wire tracking, that’s what I would do so that I could say, okay, right here is where it’s plugged solid. We dig with the excavator. We would cut the PVC schedule 40 right there and we would just cut it back as far as we had to to get through the blockage. That’s not going to happen here. Not on our watch. We’re going to be here every three months to flush this system out clean. So it’s a tedious job and when it’s this bad you just, you’re jetting it multiple times.

The guys, they’ve been at this for a while. Of course I, you know, sped this up for you guys just so that I could just tell Ya, you know, this is not something where you just put the jet in once. You got to do it several times and flush it really good.

Now, this is the basement floor drain. I want to show you what this looked like. A year and a half look at the year and a half it took and look at that pipe. It’s, it’s half full of iron ochre and that’s again on a build, a custom home, beautiful iron ochre does not discriminate. If you end up with it, there’s nothing you could do. Here’s the other, some pump discharge line.

So again, we were there for something other than this and Scott noticed that the discharge end was plugged because these come out to daylight. We cut it off and sure enough iron ochre just poured out of it. It’s like a jelly, you know when it’s not dried it’s, it’s like a jelly form. So the guys are putting through a high-pressure washer that we have with the jet nozzle.

Now you guys have seen the problem, some of my other videos where I show you on, there’s a three-quarter-inch nozzle for a garden hose. You know, if you’re a homeowner, just being I guess proactive, that works fine. You know, we use that too. But here when we saw this and the pipes are half full of the iron ochre, you know, we just went and got the high-pressure washer from the shop and sent it through multiple, multiple times.

Now Scott and his guys, they, you know, they cut a bunch of that pipe out and we got to plumb that to the creek. And again, that was just because it was plugged solid. Scott could see that. And then the rest of it we were able to salvage and just jet clean.

So if you recognize this jelly-like rust in your sump pump pit because there was so much in even the sump pump pit, it builds up. You know, even with your sump pump working, it builds up. I worked a bunch of it loose and you know, just poured buckets and buckets of water in the sump pump pit and it just came out the discharge end and down into the creek. I mean, what are you going to do again? You know, there’s really, this is the only thing you can do. It’s not like this is going to go downstream and cause somebody a problem. That’s not how iron ochre works. At least everything that I’ve researched, we cannot connect anything like that. It takes two bacterias in the soil to come together. And when you got it, you got it. I mean there’s no, there’s no changing out this subsoil that your home is built on. I mean, unfortunately, that’ll be a problem for the life of the home now.

There’s a lot of research being done and the hope is that somebody comes up with the magic bean where you just basically put something in the sump pump pit and you know, maybe forced the water to back-feed into the floor drains and it just dissolves and breaks down the iron ochre. As of right now, all such chemicals are illegal too, you don’t want that going into the city storm drains. You don’t want the different things that actually do work to end up in the creek. And you know, I’m not even going to give you the list of names because guys that don’t have a conscience are definitely using some of these very, very harsh chemicals and allowing them to flow into our environments.