How to Install a Sump Pump Discharge Line to Prevent Failure

How to Install a Sump Pump Discharge to Prevent Failure 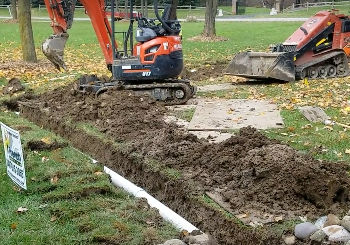 We’re using four-inch schedule 40 the Crestline. I’m going to plug them, really liked their product for a couple of reasons. I’ll go over that. I bought this piece at The Home Depot just so that I could show you what not to do and it goes together with these couplers. These couplers are 3.5 inches and then you’re splitting them because you got to share it.

This belled end is 4.5 inches and you’re not sharing it. You’re sliding a pipe and four and a half inches. There’s a belled. Then right there a piece of pipe that we cut so you can see that this piece from Home Depot has to have those three and a half inch coupler doesn’t have that bell. I also like that Crestline, they’ll put a mark so that when you glue the pipe together and you’re working in a trench trying to get it tight and you want to make sure that it’s all the way in, it’s great that these come premarked and they bevel.  It doesn’t have this real sharp edge to it.  It has a nice bevel so it goes together great.

Crestline is not the only one we use. There are several we use, but I really appreciate a company that does these small things that help us out in the field, so that’s what I recommend. A schedule, 40, 4-inch. All the old school guys, they ran three-inch for so many years. They say four inches is too expensive. For instance, too expensive. There is a jumping cost when you go from 3-inch to four inch schedule 40, but when you increase the diameter of a material, it doesn’t matter if it’s steel or PVC pipe, when you will go from three-inch to four-inch and it’s the same thickness, the pipe gets stronger, it’s more rigid. You get tree roots growing around it, tree roots, they tend to take the path of least resistance. Plus you got the heave and thaw.  This one is a shallow system. We can’t get it below the frost, we just can’t. We’re taking it out to a ditch and this is a system that’s referred to as sump line out to daylight, sump line taken to daylight, so it’s shallow. It’s going to be in the frost, it’s going to be in the freeze and thaw cycle.  Up here at the house, this was when the old line failed it just rained out on the house. You can see all the effervescence and the brick that has come out with a break from all the water that was spraying up against his house.

There’s a big erosion hall right here as well.  So we went ahead and the reason why you want to do a connection like this, you have your solid. This is, this is rigid, solid coming out of the house. Can’t do anything with that, but this here is going to go up and down during the freeze and thaw, so that’s why we build them like this. And then here’s your overflow protector. If that ditch ever backed up, the water wouldn’t end up flooding the basement. It would still find its way out here. So there are some pointers to how to install sump pump line and Michigan when it’s in the frost. Especially out today.

Why did it fail? I keep talking about this thin wall, PVC pipe, the SDR pipe. These guys want to use it for some blinds. They want to use it for downspouts, not here in Michigan, not here in Michigan and the Sunbelt region. You guys can get away with that. We see too much during the freeze and thaw cycles. The stresses on these pipes, it’s unbelievable. It’s. I see failure constantly. So this. This is what preach against here in Michigan.  So, if you’re in Canada, you’re in the north, north. If you have a winter climate, you’re not in the Sunbelt region, you want to use a schedule 40 for everything. Don’t even mess around with the thin wall and we glue it. We don’t, we don’t dry fit it. We glue it. And the guys that use silicone, they crack me up, man. Is that a joke? How often do you have to silicone it? Your shower or your bathtub? Are you a homeowner? You’re going to find out that stuff doesn’t last. Even if it says it’s a 50 year, it’s Kinda like a 50-year shingle or, or a 50-year window. That stuff, uh, normally makes it 18 years at best. But the silicone is something that you have to re-silicone every few years. So I really laugh at the guy’s using silicone. So don’t dry fit the pipe. Don’t use silicone. Use a PVC cement.