How to Build a French Drain Correctly in Algonac, Michigan

How to Build a French Drain Correctly in Algonac, Michigan 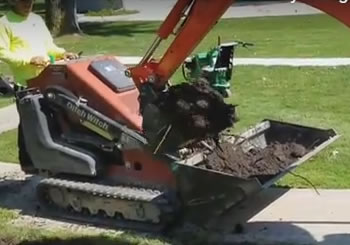 How to build a French drain system is to take an excavator and trench so that the trench itself starts in low spots and slope your way towards the discharge.

Now we like to go 14 inches wide on our trenches. We fill them with coarse washed rock. You want to use loaders to take the excavated dirt. Any tree roots you run into, the excavator can usually cut right through them. If not, an axe  or a good pair of loppers will clear the way.

But do not use a trencher. You want to use an excavator. That’s how you build a French drain. An excavator creates a nice wide trench. That’s going allow you to put a lot of stone in your French drain. The more stone the better the French drain, the longer it’s going to last.

How to build a French drain:

Since you start in a low spot, it’s going to get deep. It’s going to get really deep. The trench is going to be about three feet deep right behind this excavator. We actually are going to take this out to the St. Clair River.

I Need A Free Estimate For A French Drain In Algonac, Michigan