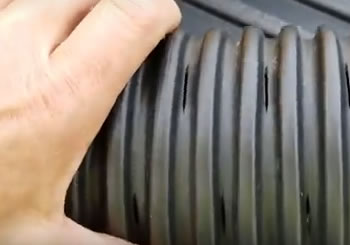 Our French Drain pipe versus Home Depots. When you go to Home Depot and you buy their perforated pipe, what you’re buying, and this is April 2018. April 2018, I just bought this pipe from Home Depot just to do this video. It’s three slots staggered and what that means is every valley if you go ahead and you just look in one of the valleys and you spin it, every valley has three slots and then they stagger them in the valleys. So this is only three slot and not a deep saw cut at all.  Three slots staggered, perforated pipe from Home Depot.

Okay, so if you buy the socked pipe, which if you watch our videos you know we don’t recommend socked pipe. This is a system that’s going to fail. It’s not a question of if it’s going fail. It’s when. We wrap our entire French Drain system, stone included Not just the pipe so you do not want to use a socked pipe on your French Drain system. But it’s still just three slots staggered, again bought at Home Depot. This is April 2018.

I want to take the opportunity to also bring up pinhole. Pinhole pipe is being sold at local landscape supply centers. Pinhole’s great if you use it the way it was intended. The pinhole pipe was designed and manufactured for farmers who drain tile and area in their fields of sandy soil. This way the sand doesn’t plug the pipe. The holes live up to their name. It’s just a small hole as if a pin had made that hole. And the water will slowly find its way into this pipe and drain out an area. But it’s going to be a very poor performer in a residential French Drain.

When hiring a contractor to put in a French Drain for you, ask them what kind of pipe they use. If they say pinhole, throw them out of your house.

Okay, we use four slots staggered with the deeper saw cuts, you can put a US quarter in this. And we also use an 8 slot. 8 slots per valley. So these are the two pipes that we use, depending on the application which one we use.