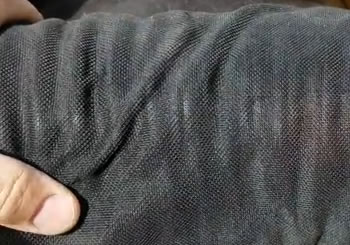 We use a pipe with really, really large saw cuts because we use a large aggregate so we can do that. We move a lot of water that way. We lined the entire trench and then we do what is referred to in the building industry as burrito wrap this entire system. This is a maintenance free French Drain system. Contaminants can’t find their way in.

Now the contractors that are buying this pipe with a sock on it, they’re saving a lot of money. They’re not lining the whole system with fabric. And then they’re not putting as much stone in. They end up putting some of the dirt back in the trench on top of some filthy pea stone that they’re using and then the system fails.