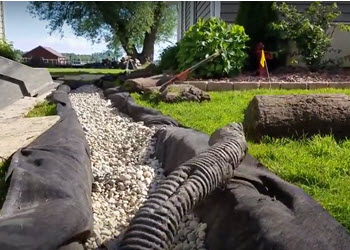 Why excavate, build a big trench versus using a trencher that only is going to open up a six-inch groove to put a four-inch pipe in and some stone? The more stone, the more water you’re gonna move. The more stone, the longer your system is gonna last. When

When you trench, you only end up with a six-inch wide channel. Well, the pipe is four inches. The channel you’re looking at is 16 inches wide and 18 inches deep. This is gonna move a lot of water. This is going to be a system that lasts. Less than two years ago, homeowner paid someone to trench in a French drain system.

Less than two years ago, homeowner paid someone to trench in a French drain system. Well, that didn’t work out too well. Six inches wide, put some pea stone over and put some dirt back over the top of it. It worked for a little bit and then it worked less and less until it finally quit.

We’re excavating out about forty yards of dirt on this project. We are lining the trench with a good filter fabric so that the stone doesn’t migrate into the subsoil. And that the subsoil doesn’t migrate into the stone, causing this stone channel to clog. This is gonna move a lot of water, this pipe is gonna move 240 gallons per minute. And the stone is going to move probably about the same amount. This system is going to scream.

For More Information on a French Drain System in Michigan