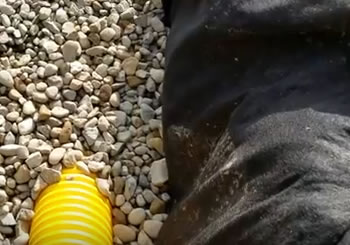 As you can see our trench is completely filled with stone, we don’t put any of the dirt back in. Now, this was not created with a trencher, this was dug out with an excavator. To be able to have a channel stone like this to build a french drain like this, you can’t use a trencher. You’re going to end up with one-tenth of the stone. All the contractors that are using the trenchers, you know that because the pipe’s four inches wide, and the trencher is going make a six-inch groove.