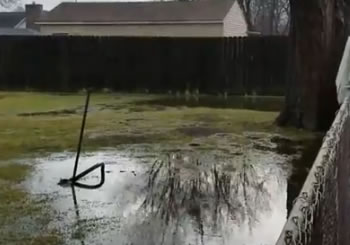 This is the discharge of a backyard sump system. Let me walk you through it, show you how it works.

You can see how much water it’s moving. It’s very active. This is January in Michigan, and we had a lot of rain earlier today. We’re having a January thaw, we had a foot of snow. The backyard held so much water that there was actual resident ducks, ducks that basically lived here.

Neighborhoods that do not have storm drains, what ends up happening when you can’t gravity drain the water out because there is not enough pitch to the street, you end up below the street when you put pitch on the pipe. What happens is people just start bringing in dirt. That’s it what happened here in this neighborhood. You see how they put the galvanized sheeting up against the fence to keep the dirt from falling out into their yard.

Everybody around this homeowner has raised their lot and pushed all the water into their yard. This individual is basically too flat. They hurt themselves by bringing dirt in and trapped a bunch of water in their yard.

This homeowner bought this home a year and a half ago, took the initiative to pay for a French drain. We have a French drain running along the back fence, taking in all the water. It’s pitched and it goes to a sump pit on the side of the house that’s six feet deep. It had to be that deep so that we’d have a good pitch to it. And then we have a sump, we have a sump pump, that lifts the water from the sump pit. And this is a 24 inch in diameter, 6-foot deep sump pit. Lifts the water from this backyard system and injects it at the curb of the street. It runs down the street to the storm drains in the streets.