Why would anyone put dirt back in the trench while building a Michigan French Drain?

Why would anyone put dirt back in the trench while building a Michigan French Drain? 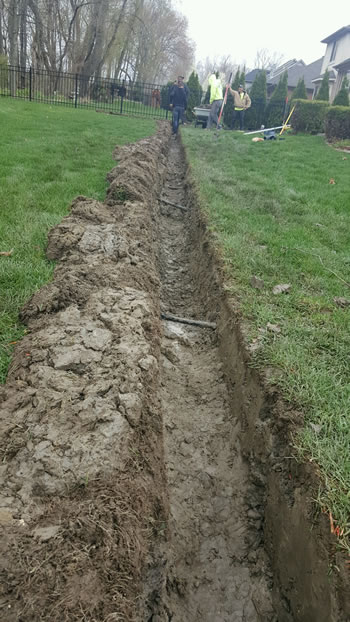 French Drain systems/curtain drains depend on the water’s ability to travel from the grades surface of the troubled area through usually turf grass plants and leach into a thick bed of coarse washed rock. Never put dirt back in the trench over the rock. The French drain/curtain drain absolutely depends on this to work efficiently and last for many years, even decades of service if the install is done correctly.
I have seen more jobs done wrong than right by homeowners and many competitors. I have watched installs where the contractor trenches with a trenching machine that is intended for running utility wire or lawn sprinkler pipe as opposed to shoveling out the trench, as it should be done. Next they lay a 4” pipe with a sock on it and pour bags of pea stone on top of the pipe. Yes, so little stone it was bought in bag quantities. Then dirt is put over an inch of pea stone, with the bottom of the pipe laying on the dirt. Once they pack as much dirt back in as they can, they put the sod over it. A French Drain built this way will not move any volume of water. It will take very little water in before not working at all. The homeowner then has to pay to dig it up and remove the plugged pipe and start over.

Many homeowners have told me that another contractor said they leave the dirt mounded under the sod for when it settles. Oh brother what a line of bull! They are lazy and not equipped to haul the dirt out. Coarse washed rock is not going to settle at all as long as it’s not mixed with dirt that will plug the stone. Never, ever put dirt back in a French Drain trench. Dirt removed from a trench which should be 14” in width should never go back in the trench. It should be replaced with drainage stone.

Never use a pipe with a sock on it for a French drain/curtain drain system. The entire trench needs to be lined with 8 oz. filter fabric to contain the system from sediment and solids that will plug the system and reduce its performance in the meantime. Never lay the pipe on the bottom of the trench without 8 oz. filter fabric down first. Stone should then fill the trench on all 4 sides of the pipe and the 8 oz. filter fabric wraps the stone. Never mound the stone, it does not settle. If you run short of stone do not use the dirt to fill the trench, order more stone. All dirt dug from the French Drain trench must be removed and replaced with stone. The more stone used the better the French Drain works and the longer it will last.

Pay to have it installed right the first time, so you will not have to pay to have the French Drain done again. It is a simple truth that most contractors are not equipped to dig 14” trenches in confined spaces such as subdivisions or city lots. What I’ve also concluded is that contractors with the dump trucks for hauling in tons of French Drain stone and hauling out yards of trenched dirt do not want to do the hand digging and intricate details of French Drains. Our crews are equipped with specialized tools to carry out the build of a lasting French Drain.