Why use a coarse washed rock for construction of a Michigan French Drain?

Why use a coarse washed rock for construction of a Michigan French Drain? 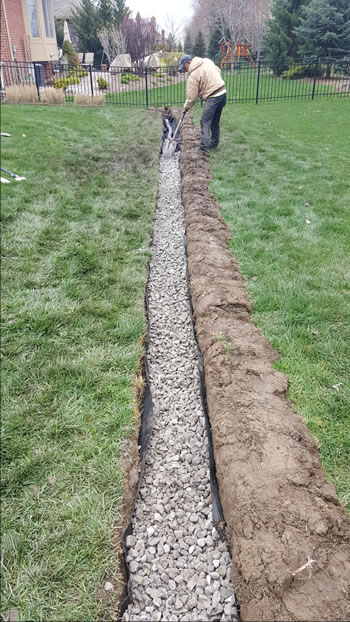 French drains that fail do so for many reasons. Most handymen, DIY guys or lawn sprinkler crews that install a pipe for drainage use as little rock as possible and sometimes none at all. I can’t count the number of times I have dug up pipes on a failed system and seen where a perforated corrugated pipe with a sock was buried. Yes just covered with the very dirt that was dug to create the trench for the pipe. Sounds hard to believe right? Over half of all the drain pipe in the ground are done this way. Some fill the trench and cover the pipe with sand which resulted in a plugged French drain system that never moved any real volume of water. I’ve seen unwashed pea stone a couple inches thick and then dirt on top of that, again failure just months later. I’ve also seen gravel (stone and sand mixed) rock with fines in it which plug the French drain system. Unscreened crushed concrete with fines in it as another bad choice.

These poor decisions are the result of one of several of the following:
•    Didn’t know better, was misinformed
•    Short cuts to use less labor to build the French drain
•    Readily available material, free material, trying to make use of material left over from another job or project
•    Homeowner did not want to pay for quality material
•    Contractor cheated the homeowner on an ill-advised French Drain system

In the State of Michigan we have natural stone and a very hard limestone readily available as a good coarse rock for French Drain construction. A great test for a French drain stone is to begin with a 5 gallon bucket. You can purchase one at a home improvement store. Drill the bottom of the 5 gallon bucket with as many 1/8” holes as you can, grouping them tightly together. Now if you put sand, gravel, unwashed rock or a stone that was not screened for fines in the bucket, it will plug. These tiny pieces will plug these 1/8” holes at the bottom of the bucket if you run water in the bucket. The dirt and fines work their way to the area where the water is supposed to pass through at the drain holes. The amount of water you wish to move is slowed down to the point, in many cases, where no water will pass through the bucket.

Now if you fill the same bucket with marbles it will move so much water it could keep up with a firehouse! That’s the type of rock you’re looking for to build a French drain. I prefer a ½” – 3/4” coarse washed rock that is screened. Pea stone I have found works but doesn’t move the volume of water. The more rock and larger the trench the more water the French drain can handle and the longer it will work.

For best results you need to use these steps. Dig a 14” wide trench and line the trench with the 8 oz. commercial filter fabric. Then put 3 inches of rock at the bottom of the trench.  Place the 4” perforated corrugated pipe (without a sock on the pipe) on top of the rock. Next fill in around the pipe with stone on all sides and wrap the filter fabric on top. Now it is fully contained to not allow sediment or solids to contaminate the French drain compromising its performance.