Why should 8 oz. commercial filter fabric be used in a French Drain?

Why should 8 oz. commercial filter fabric be used in a French Drain? 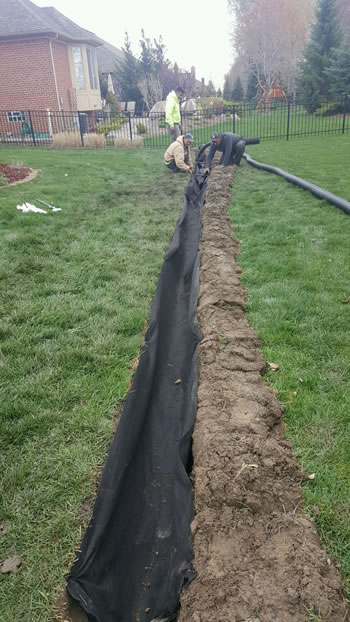 A French Drain system has some of the worst conditions for filter fabrics because they will be usually damp for the duration. Most fabrics will decompose in these conditions. A heavy 8 oz. commercial filter fabric is what it takes for a lasting French Drain. I have found the best results using filter fabric with a rating of 90 gallons per minute (90 GPM) per square foot of fabric. French Drains need to have a fabric that is designed to allow minerals in the ground water to pass through, so mineral deposits do not build up on the fabric and impede its ability to let water flow freely.

Fabrics are among some of the building materials that are most misunderstood. Homeowners as well as most contractors do not realize that there are hundreds of fabrics made all with a certain level of performance in a particular category. Many people think that outdoor weed fabrics are what you use universally for everything. However, landscape weed fabrics do not have the correct flow rate, filter quality or the longevity to hold up in a French drain application.

I have seen situations where the landscape fabrics decomposed as early as 1 year, contaminating the channel of coarse washed rock and filling the spaces between the stone where water travels with sediment to the point where it no longer moved water. Some other cases in which I was called out on to problem solve, the fabrics did not have the correct flow rate which resulted in the surface water taking days to drain. Years ago I remember being called out on an issue watching a homeowner punch holes with a screwdriver through an incorrect fabric, just to drain the surface water. In another instance, I was hired to install a French Drain system for a homeowner whose previous French Drain was installed improperly. The previous landscape installed the French Drain with the wrong fabric, which ultimately led to failure. You have to avoid thin fabrics because they break down quickly and deteriorate. If the fabric is too dense then water cannot pass through freely.

The picture provided shows a French Drain trench being lined with an 8 oz. commercial grade filter fabric that is rated for 90 GPM through 1 Sq. Ft. of fabric. This allows for fast drainage of surface and ground water during even the heaviest rain events. The heavy 8 oz. fabric will not decompose allowing sediment to plug the saw cut corrugated pipe. All the stone around the pipe is wrapped with this fabric, making it impossible for contamination to enter into the French Drain stone and pipe keeping its performance at its maximum potential for decades. The fabric must be across the bottom of the trench, up the sides and laid and folded over the top of the stone. It must be 3” lower than the grade so there can be room for 3” of grass and its roots to grow on top of the French Drain.