Why corrugated pipe is used when building a Michigan French Drain 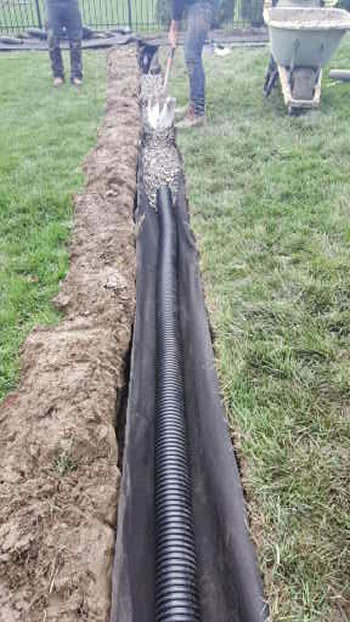 French Drain installations in the northern climates have to be built using material that has flexibility during the freeze and thaw cycles. In Michigan the building code for footings is a minimum of 42” deep for very good reason. Frost typically does not go below 42” in Michigan so it is unlikely that the frost will get under that footing and move, shift or lift it. A shallow foot or small footing such as a deck post can fall victim to frost heaving. Michigan French Drains are not below the frost line so the pipe that is used will be under stress during the freeze and thaw cycles.

Hard pipe, or smooth wall as it is called, comes apart at the glued joints or cracks. It’s much worse in clay soils where French Drains are needed. Corrugated pipe in a single wall will be extremely flexible in northern climates. I have over 30 years of French Drain installation experience and never had a single walled corrugated pipe crack or split under these harsh conditions. Many argue to use a heavy wall pipe. There are many different conditions that must be considered when building a Michigan French Drain.

Ice builds up and backs up in all surface drain systems. The potential pressure of confined freezing water is 10,000 PSI. A 4” 220 PSI schedule 40 PVC pipe has a required minimum burst pressure of 710 PSI. It doesn’t hold up to the winter weather and is not a question of will it fail but when. The perforated corrugated pipe is designed to expand when water freezes and contract during the thaw to start moving water again.
Some argue you can’t clean out corrugated pipe with a drain snake, but this is false. Yes you can but it must be the correct drain snake so you do not tear the corrugated pipe. If the French Drain is built correctly the first time it should be a contained French Drain system design that does not allow solids or sediment to enter the pipe.

Now downspout drains are different. Yearly it is recommended to have them cleaned and cleared out of all debris. The solid corrugated pipe is highly recommended for Michigan downspout drains the same qualities that the perforated corrugated pipe has for Michigan French Drains applies. When ice builds up it expands the corrugated pipe, not splitting or cracking it. The pipe will thaw during a warm up and move water as needed. French Drain designs as well as downspout runs and how they are terminated is critical to the success of controlling the water on your property as well as tens of thousands of gallons of water that come from your homes roof top that could potentials cost you thousands of dollars in damage if not managed properly.

For a French Drain that is 14” wide and built to last for decades call for a FREE estimate.