What is an open French drain?

What is an open French drain? 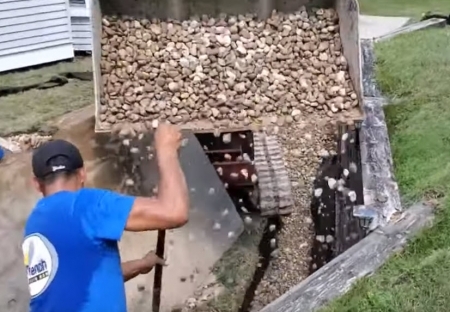 What is an open French drain? An open French drain is when you’re not growing grass over it, the stone is exposed. This will move water faster than any other French drain. This is just like one long blind inlet. Basically, you have all this stone that the water just, it’ll just pour right through it with no interruptions. It moves water so quick.

We have the large aggregate that we’re putting in this system. The larger the aggregate, the bigger of the voids, the more water you’re going to move. You can see that we’re dropping one and three quarter inch cobble into these open French drains.

The water used to come off this hillside and just flood this backyard and it would just sit inches over the patio, so we’re going to catch all that water in this open French drain.

Okay? Right there by the patio. You can see where we’re also having a second line of defense in the event that so much water is coming down this hill during torrential rain. If all that water that’s coming off the wood timbers pouring into this backyard, if that first line of defense, that one open French drain along the wood timbers does not take in all the water. We went ahead and we put a second open French drain around the patio that used to have several inches of water on it and it’s a walkout house so the water would just find its way right into that door wall, which was no good.

So if you’re looking for something for extreme water conditions, you know you have a lot of water, you know you’re moving a lot of water through the yard, do something like this. It’s decorative, it’s low maintenance. It’s not going to grow any weeds because the whole trench is full of stone. And we use our High Octane pipe with open French drains because you’re moving water so fast in an open French drain that you better have the pipe with the most inlet in the world. And that is the Baughman royal blue High Octane.

So the guys are here, just this is after hours and hours and hours of excavation and hauling out clay. Believe it or not, most of the work is done at this point. You can see how smart this veteran crew works, so they’re not spilling stone everywhere.

So that is a burrito wrapped French drain like we teach you guys to build and over the burrito wrap we’re putting a layer of stone just for aesthetics so you can’t see the fabric, the cobble rock, the shoreline stone, the round rock and keep that in mind. Always use round rock. Round rock doesn’t compact, so it’s always going to flow more water. Sharp rock, the crushed stone that will compact it won’t move as much water for you. So this is what an open French drain is.

If you like when I’m onsite with the crew and I’m shooting videos showing you actual jobs then we give you explanations for the different terms and how we build things, please give me a thumbs up so that I know that’s what you want me to do. Whatever the subscribers are after, we always are looking for input. All right guys, until the next video.