What is a Traditional Blind Inlet?

What is a Traditional Blind Inlet? 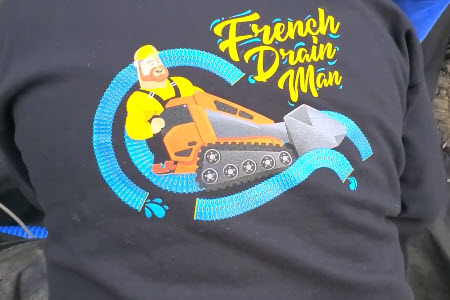 I want to show you guys what a blind inlet looks like. Now, this is a traditional blind inlet guys. We have the High Octane running two parallel pipes, the Baughman High Octane, the Royal blue, giant windows.

Now you don’t have to run a pipe up into a pothole in the yard. If you have a big enough system and you can move all the water, you just have to dig out some of that poor percolating soil. Get into that pothole and just fill that with stone. The water will run through the stone into the pipes and out through your discharge. That’s a traditional blind inlet.

We’ve of course made some changes, you know, on top of the stone, we’ll actually wrap this stone and then we’ll put a plastic grate so that you can blow the leaves off. You know there it’s actually kind of known as a trash rack. That way you’re not filling a stone full of garbage and this blind inlet that’ll have stone, that’ll be the same stone as the stone we’re going to put it in the French drain. Keep that stone free of as much debris as possible so that your flow rate stays up for years and years to come.