What is a recipe for failure in the construction of a Michigan French Drain?

Why is the use of corrugated perforated pipe with a sock on it a recipe for failure in the construction of a Michigan French Drain? 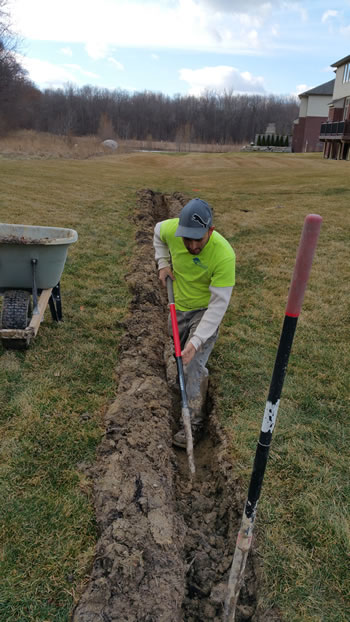 French Drain trenches are dug in the soil around a home or property. If a good commercial 8 oz. filter fabric does not line the trench soil then sediment will fill the pockets between the washed coarse rocks. This will affect the French Drains ability to move water and do the job it was intended to do.
Over 30 years ago I can remember my mentors building curtain and French Drains with pipes that had a sock over it. I will never forget a conversation I had with a veteran contractor with whom I would seek advice. Remember, there was no internet or Home Depot DIY literature back then. I eased into the conversation with positive notes for I had much respect for this man and was fortunate to form a trusting friendship with. I would bring the industries latest technologies to be tabled for debate. Being hungry for knowledge as a young contractor, it helped keep my mentor current with some of the latest products as well.

I spoke about several plugged systems that I discovered were built with perforated pipe with a sock. Some contractors thought that putting a pipe with a nylon like sock on it will save you a step in building the French Drain. This will only result in a short lived French Drain system with an early expiration date from the time of build.

The reason is because:

We worked in the same territory and dealt with the same soil types. I told him that I was replacing many French Drains that contractors from his era had installed. The minerals in the ground water also would plug the sock material around the perforated corrugated pipe and would not let water through. The nylon on the pipe would calcify, not allowing the water to leach into the drain pipe. He states that he recently discovered the same thing and he went to a quality 8 oz. filter fabric to line the trench with and wrap the entire system separating stone and pipe from contaminates.

More than 30 years later and those French Drains done in that manner, without the nylon sock on the perforated corrugated pipe are still working today. Together we tried all the various theories, so now the practices in which I install are proven not to fail. The current way I build a French Drain does not have an expiration date. I have yet to have one of my French Drain installations fail.