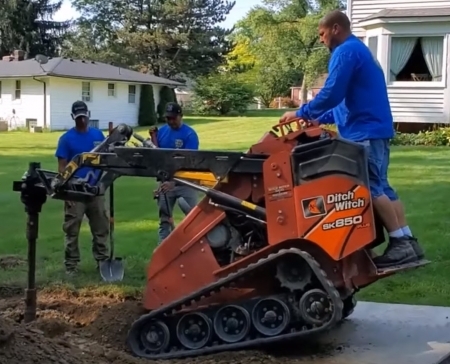 Welcome to the French Drain Man channel. I’m Robert Sherwood and I’m here to help educate the homeowner, the DIY and the contractor so that they can make the right choices when it comes to building yard drain systems,

This is Baughman Tiles Knife Cut and knife cut is when you don’t grind out any material. It’s just literally no material has been removed. There have just been some slices. So now that I told you that there, you could probably see them. If you look really close, there’s six, what we call knife cuts, six slits per valley and you can barely see them. We can barely see him. But that’s the point. That’s the point.

Now in agriculture in what we refer to as AG for short, this pipe replaces when the AG, when people in agriculture want to save money and they do not want to run a sleeve or sock. This pipe won’t fill up with dirt and it takes the place of that at a more economical price. So there’s your use in AG. So what are we going to do with it? Well, I’m going to take you out in the field and show Ya. All right, let’s go.

All right. We’re in this backyard and Bloomfield, Michigan and it’s living up to its name. Bloomfield Hills, Michigan. You can see this hillside that’s behind this house and it wasn’t done where the water will shed around both sides. There was somewhat of an attempt but they needed to go four or five timbers higher, create a swale so that the water would go to the left and the right of the back of the house. So this gentleman has been just living with this fear. Every time there is a hard rain that he’s going to get water in his house. He’s got a walkout.

So we did an open French drain right after the timber because the water just pours like a waterfall off of that retaining wall. You can see the guys right there they’re working with the Baughman High-Octane.

I gave them two lines of defense. I know that if this water’s really moving after a freeze-thaw, we have a bunch of melt and rain and if the ground is frozen and it’s coming down like it’s on a luge of some kind, I wanted to give them a second line of defense. So there it is. This patio would have water standing on it. Now it’s going to have an open French drain around it. And then the second line of defense does go to a covered French drain. He did have a sprinkler system, so that won’t be an issue for him.

These tie together in a 24-inch by 24-inch blind inlet so works out pretty decent. There’s that cover for that 24 by 24. All the water that they’re trying … See, that needs to be swaled right there. That’s what I’m talking about.

As a rookie installer, this installs that I’m going to show you, this would be the one that would trip you up. You see this cul de sac. You see that neighborhood. Now, this is in Bloomfield Hills, Michigan. It lives up to the name hills. Look at the homes that are down in the ravine. When you’re trying to build a system that’s going to take stormwater when you have orange or red on the radar for rain, you can’t imagine what you need to build. It’s hard as an installer that’s young or a DIY doing their first project. It’s Whitewater. When you have a thaw after winter and with rain, the amount of water that comes down that hillside is just, it’s hard to imagine. It really is.

I remember building systems when I was a younger contractor, and I remember when the big, the really big storms came through. I could not believe what it takes to corral that much water. So this system here, you know this speaks of the three decades of experience that we have. There are two drains back there that are open French drains and a blind inlet that’s 24 inches by 24 inches. That’s just to catch all the water. It’s a giant reservoir as well because what happens, you can’t move the water around this house fast enough. It’s just next to impossible. You need to have a system, a collection system that also serves as a giant reservoir.

The city streets flood down here. So what do you do when you’re trying to get this water out to the front yard? Well, now you’re building a leach field. So the guys are digging a really, really large trench. You can see how wide that is. It’s much wider than our usual 14 by 14 is where we start. We tell everybody that’s a starting point, 14 inches by 14 inches and the system grows from there if need be.

Right where they’re digging, they’re going to start to transition into the leach field. So we have this huge collection system in the back and now we’re going to take the water into a huge dispersal system if you will. It’s going to be knife cut in a leach field. It’s some we’ve not shown you guys and that’s why I put a few videos together and picked a couple of jobs to help you out because everybody was asking we just don’t understand what you do when there’s not a storm drain.

So we’re definitely going to teach you in this series, both what we do when there’s no storm drain and what we do when a storm drain becomes overwhelmed. In this case, the streets flood the storm drain can’t take in any more water, so we want to have a leach field. For example, we just had an event where we got five inches in an hour. Now in some places like Hawaii, Louisiana, I know when these tropical storms come through, I’m told that you guys are measuring this stuff in feet. Well, we don’t see that here in Michigan. Five inches in an hour. That’s a, pretty big deal and that’s a pretty big rain event for us here in Michigan. So this system keeps up with that type of stuff. No problem. And it seems like our weather’s more extreme now than it’s ever been. That’s not something that just occurs every few years. It seems like it’s now occurring a couple of times a year. So I’m going to get you back to Rochester Hills, Michigan and pick up where we left off on that install.

All right. We’ve been using this rubber gasket and I want to show you guys what we do so that you’re not losing your stone into your crocks or your sump pump discharge, your lift stations, whatever you got going on. We want to make sure that you know about this four by 4. It’s a four-inch by a four-inch rubber gasket, so you drill with a hole saw that is five-inches and this seals up so nice and it’s such a great fit. Truly is. And then that way you’re not losing dirt and stone. I mean that’s what ends up happening. Guys cut holes and they’re kind of barbaric and then they just stick the pipe in and you start losing dirt. Your sump pumps pumping it out or it fills your crock. Either way, it’s not good. So these rubber seals, in my opinion, are a must and we use them for absolutely everything. We’re going to hook the Baughman High Octane up to that. I just wanted to show you this and take you back to Rochester Hills, Michigan here.

Remember to do your vertical before you do your horizontals. The auger just bounces all over the place. If you already do your trench. So you want to start out with your vertical drop first. This is going to be a 24-inch dual wall, culver. Scott’s down in the clay and he’s working that Ditch Witch 850 Plus pretty hard.

As soon as he gets to the depth he wants. See he’s bringing up all this heavy soil and he’s just shaking it off the auger bit so that it’s just easier this way. And to do it like that, this is easiest way to get the dirt out of there. If you just keep it spinning and you raise it up, it just falls right back in. So look at how much dirties brought up. Look how much labor he saved.

So here’s some dual-wall culvert pipe. So we’re cutting this down. I want the guys to have this covered with a couple of feet of soil. We’re actually gonna put some straw over this leach field system. This guy does not have any iron ochre or he doesn’t have any mineral build-up. Nothing. I mean his sump water looks like it’s coming from a mountain stream. It’s really, really clear. It’s been that way for years. So I don’t see any reason why this should ever have to be exposed.

There’s a rubber gasket. We use what I call the cone to snap into that and we’re tying it right into the sump line. Now the sump line used to go all the way to the back of the yard and it would just flood out one area of the yard. What we’re going to do is we got rid of half of that some pump discharge line and we’re going to take that run and create a leach field.

All right? I can’t even blame you for wearing that Yankees hat the way the tiger’s been playing. I mean, honest to God, I normally would bust your balls. I ain’t even gonna go there, man. I’m almost ready to wear that damn hit myself.

All right guys, until next time, let’s all work hard to do it right the first time. We’re going to keep it simple. You DIYers, stay tuned for more High Octane.