How to build a French Drain that will last for decades

How to build a French Drain that will last for decades 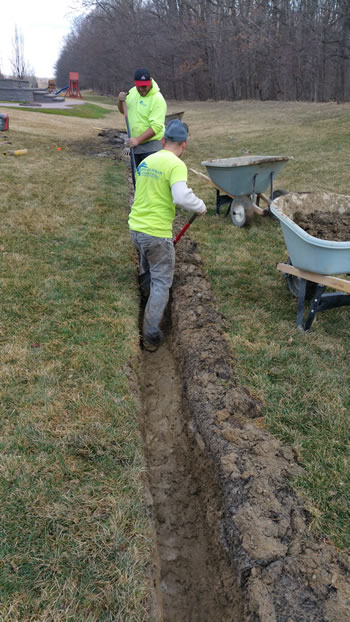 Most French Drains are done with a trencher due to the availability. Every rental center has one, however a trencher can only trench a width of 6” – 8” wide once a 4” corrugated pipe is installed that does not leave much room for drainage stone. Because it is less labor, less haul away of soil and less drainage stone, homeowners and contractors will install a French Drain with a power trencher. These French Drains do not last and work poorly before they stop working. Later the homeowner notices the area draining slowly, eventually not at all. A trencher causes a lot of damage to sprinkler systems or anything in its path. A trencher is the wrong machine to build a lasting French Drain.

For hundreds of years, French Drains were built by digging a wide trench with slope to keep the water moving in the desired direction. The trench would then be filled with stone and no pipe at all. The water moved through the air pockets between the stone. These drains are a proven testament that the more stone the better the French Drain. It also proved the more stone used the longer the drain lasted. Through more than 30 years of installation practices building French Drains that are 14” wide each and every one of them are still working to this day. It has been proven over centuries the more stone the better French Drain. In fact, we have repaired now hundreds of our competitors French Drains that fail as early as 6 months because they used a trencher, wrong pipe, incorrect fabric and not enough stone. The proper build method is to excavate a 14” wide trench.

When excavating 14” wide French Drains every shovel of dirt must be removed, hauled away and replaced with coarse washed rock to move the water. It is extremely important that a commercial grade 8 oz. filter fabric lines the French Drain trench to keep sediment from plugging the spaces between the coarse washed stone. Never put any of the excavated dirt back in the trench. It will impair the flow of water. Put 4” of stone at the bottom of the trench over the fabric, then lay the corrugated pipe down the middle. Fill along both sides of the pipe, then fill the rest of the trench leaving 3” of room for grass and roots of the grass plants. Wrap the stone with the fabric, including over the top of the coarse stone to keep dirt from entering the French Drain.