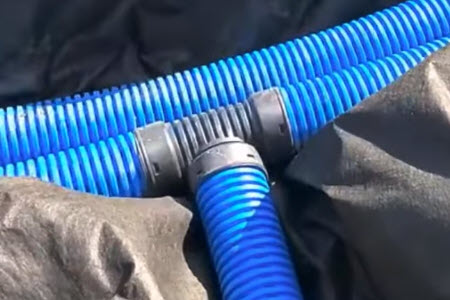 All right. So Valentine’s connecting the one-inch poly. We buy hundreds of feet of poly pipe. In Michigan the sprinkler systems are all made out of a poly pipe that way during the freeze and thaw cycle, this stuff’s very flexible. It can move around. I know that the Southern climate, you guys use a lot of PVC. We can’t do that here. And he’s using the stainless steel crimp clamps and he’s running a brand new piece.

Guys, this is really important because when you catch this with a shovel and it collapses a little bit, you’ve kind of compromised the system. You don’t want to have five or six sprinkler heads on a zone, and then now you’re restricting the flow of water. You’re going to get a call and you’re gonna have to call him back and you’re gonna have to figure out where the line was at. You’re going to take your system apart. You don’t want to have to go through all that. So just just replace that line. It’s super, super easy. You just, you know, keep some one-inch stainless steel crimp clamps. Keep some three-quarter inch and keeps them half an inch and then equally so you know you want all those couplers.

So what you’re going to burn through mostly is couplers and crimp clamps and then just have rolls of pipe. And the guys that don’t do this, you’re the guys that are sending your crew and you’re foreman to Home Depot and Lowe’s six or seven times. Guess what? You just cost yourself a lot of money. You could have been buying these parts in bulk from one of the suppliers like Ewing Irrigation or SiteOne. I love this.

All the water in this pipe moves just through the pipe into this pipe and down. So it’s raining and it’s pouring and all the water is coming off this giant beautiful outdoor living space. Very nice, very nice. So when it’s raining there is a lot of water coming down here. It’s no wonder they’ve got a problem with how wet everything is through here. That water is just going to go into these blue pipes with those big cutout windows. It’s just going to flow right through these pipes. And both these pipes are going to move water.

So we got one teed and the water just moves right through these pipes. We want to build a reservoir and it’s a big void. This is really important. If you have a small aggregate and you can’t get the big round rock, you create your own giant voids. It takes ridiculous sizes of rock to move the kind of water that two High Octane can move.

Now think about this guys. Now you have bigger voids than you would if you had just one pipe and all aggregate. Now you’re buying more rock. How much does rock cost? Man, this stuff is crazy money now, isn’t it? It’s nuts. So I remember when they used to give the shit away.

Here are some Baughman Tile Company end plugs. We like these. They don’t catch on anything. They don’t get knocked off as the caps do. We’re exclusively just going to end plugs in getting away from the end caps.