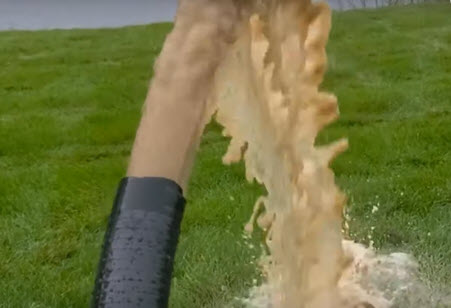 I want to make sure that everybody’s aware of this. We use a four-inch rubber gasket and the reason why you want to use this, you don’t want your drainage stone to fall into the city’s storm drain or your lift station or your sump pump pit. You want to seal it tight with this four by four rubber gasket. This works dynamite. I’ve tried all kinds of things over the years and nothing beats a nice fit like this. We use a five-inch hole saw and if you’re having a little trouble with it, you can always put a little dish soap on it, but we like to put them in dry. You can see that we have one of our lift stations, five-footer and we’re tying in the High Octane. What happens is as dirt falls in the sump pump takes your dirt out the discharge end.

I wanted to show you this working during a thunderstorm. This was a thunderstorm. This is Baughman High Octane. This is how High Octane moves water from your backyard, from your outdoor living space. We have a half-horse Liberty in there and this is a 100-gallon basin. This is one of the basins that we have in our online store for you guys, you keep asking for it so we put it there. It’s a one-piece which is fantastic. We love it. We slip it in the ground. And with those rubber grommets, you don’t lose any of your dirt or stone into the basin. I just wanted to show you when this discharges 50 gallons of water, what it looks like. It’s rare to catch one of our systems in torrential rain. This was a really good thunderstorm. I was in the right place at the right time.

Everybody’s always asking to see the systems work. So the job wasn’t entirely done. The hard plumbing that’s going to go to the lake. That wasn’t done yet. And our electrician hadn’t been out yet to do the final, you know, we want to have this on its own circuit. So that’s why you see an extension cord. We don’t do things like that, you know better. This system was almost complete. We just had some detail left and this is it. It got tested and it got tested early. It wasn’t in long, but look at how much water.

Now you can see that Liberty pump at the bottom, the cast iron Liberty pump just disappears. The water fills up so fast, those rubber seals, no dirt, no dirt is coming in between the pipe and the basin where we use the hole saw. That’s what’s really nice about those rubber grommets. That’s why you see us using those.

So, this is a really, really hard rain and this is a really good test. Now here’s another 50 gallons. Look how fast it filled that basin and halfway up. That’s a two-inch, two-inch discharge for everybody. I know you guys like to have all the details.

The reason why that water’s a bit dirty. We didn’t get the side down yet. Again, we nearly had this job completed. I’m going to show you this job from beginning to end so you have that to look forward to. But meanwhile, since I had this footage, I want to slip it in here and show you this system working. It’s moving a lot of water and I wanted to show you how important it is to use those rubber grommets and you end up with sinkholes around your sump pump pit or your city storm drain as well. So these things are dynamite, great fit, just love them. You don’t have to wait for nothing to dry, just keep on working.

So I wanted to make sure you guys were aware of that. I’ll show you another application. And it was on some infrastructure the city put in. We ran across a plastic basin, we cored it with a five-inch. Okay, so don’t ever go that high. So there was a drain we ripped out that wasn’t low enough. So there’s a couple of points here. I liked that barbed four-inch, we call it the Cone. And then we take our PVC to the corrugated coupler and that is a dynamite hookup. And we hooked our High Octane to that and we tiled taped that hole shut because that was too shallow of a yard drain.