Yard Drainage System and the #1 Reason for FAILURE

Yard Drainage System and the #1 Reason for FAILURE 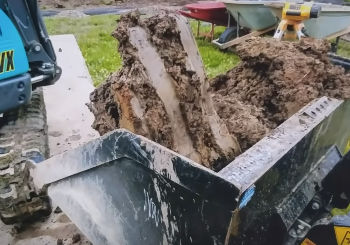 Welcome to the French Drain Man YouTube channel. I just wanted to focus on one thing in this video. One-third of the yard drainage projects that we are contracted to do, we’re actually replacing somebody else’s failed drainage system. I wanted to go over the number one reason why drainage systems fail.

This is an excavator or backhoe. Some people call it, you can see the bucket loads up our mini skid loader. You can see it’s full of big solid chunks of really poor draining soil. This is soil that doesn’t percolate. That’s why the water lays in the yard.  So you can see this right here just came out of the bucket and they loaded it in the front of this mini skid loader. That’s how bad the soil is. None of that dirt should be put back in. We haul it all away and we replace it all with stone.

Now I’m going to show you why these drains that we’re replacing fail. So that same soil now ground up with a trencher. You can see how it breaks up. Instead of having that big bucket, that big solid bucket of poorly drained soil that doesn’t percolate. You have all these little pieces of this really nasty soil. What happens is they use a trencher like this and they’ll have that small groove. They’ll put a pipe in there and we’ll just pour some stone over top of that pipe and then they’ll push that dirt back in.

Well, this drain will actually work because it’s all that dirt ground up. So there are air pockets between the dirt now.  So the water will run through it and you’ll think that they built you a great French drain and it’ll slow down over time. It’ll slow down and it’ll get slower and I’ll get a slower and then one day it won’t work at all. One day that soil has all come together and there are no more air pockets. That’s the number one reason for yard drainage failures. Don’t use a trencher. Don’t hire a contractor that’s going to use a trencher. And even if they’re using shovels, don’t let them put the dirt that they’re digging out back in. You have poor soil if you have a drainage problem. So why are you putting the dirt back end with the poor soil? You want to haul all that dirt out and you want to replace it with good drainage stone.