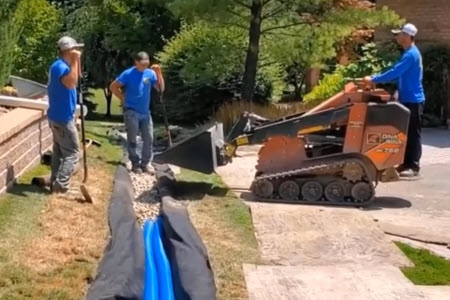 We have a lot of sheet water coming off this large driveway. It has a cobblestone open French drain, but here’s the problem. We didn’t do that. All this water is being discharged where this retaining wall is. This is a second wall too and it’s leaning and it’s failing because of the saturated soils.

Now that downspout and that long gutter run, all that sheet water coming off that roof, all the sheet water off of this driveway, it all runs right here to the corner.

Now, this was to cut down on the erosion, but the water goes like a river through here. We’ll just widen this and use our one to two-inch cobble. We’ll keep that exposed.

So we’re going to take that all the way to here. Now I should also add there is a failed French drain here and it discharged right in this area. I couldn’t find the end of it, but it doesn’t matter at this point. It’s not working. We need to put in a system that does. I know we’re scheduled out quite far, but I definitely will report back to you guys.

That neighbor’s home, you can see how the roof is. There’s so much roof there and there’s only one gutter downspout. That’s it. So there are just thousands of gallons of water coming down.

Now this driveway slopes and everything’s meant to drain in the back. So, I went ahead and I measured the drive and a good guesstimate on the roof and just a moderate rain event are thousands and thousands of gallons. It’s just insane.

So we’re putting in two pipes here. I think the water is going to come in so fast that we’re going to have to have two pipes so that we have like a reservoir situation

We are putting in the really big aggregate, like an inch and a half aggregate. Scott made a good point. He says, man, it’s like Groundhog’s Day. I mean we just keep digging up garbage systems. There it is another one, that’s a Haviland Drainage, it’s garbage,  And never use a pipe with a sleeve sock on it.

You never want to run wrap your pipe and stick it in the ground and then pour a little bit of pea stone on it. That’s what that drain had. It didn’t work.

So you know these retaining walls, they’re thousands and thousands of dollars. So this is the second one and it’s all blown out and all leaning. A lot of times the camera can’t really capture it. It’s leaning and it’s failing.

In a desperate cry to save what they can, they got us in here because the homeowner’s not gonna fix that wall or replace that wall again without going right to the source of the problem. What caused it the fail in the first place.

So we got the inch and a half cobble. This is going to be an open French drain.  Right here we’re going to have so much water. We have downspouts running in this direction. The neighbor’s patio in the backyard, it’s all sloped here. This sees so much water. Remember the water up top is coming down here. So this open French drain does a lot of things. One, if this won’t water actually gets moving, which I believe it will. This will act as riprap drainage does. It’ll slow it down. Water has less erosion, it’s less damaging when you slow it down. So but an open French drain, the water just disappears. It hits that and it’s amazing.

This is going to have grass on the top back here. So we are going to do our wrap and then they’re going to go ahead and pin it and lay the sod over it. And then we WYEd the two pipes to one because I already explained why we have two pipes in there just so that if the system does fall behind, you know it’s acting as a reservoir, you know, having a second pipe in there. We’re going to discharge it right here and so the lawn crews can weed whip and just beat it, beat it up. We’re just going to put a short stick, a schedule 40 in there with a critter guard so no animals crawl up in there and make a home.