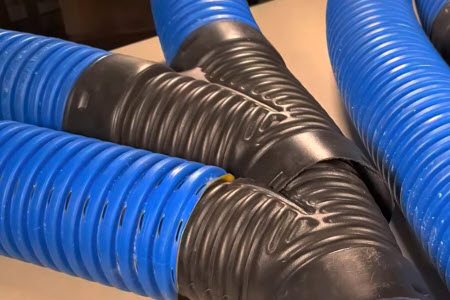 Welcome to the French Drain Man channel. I’m Robert Sherwood and I’m here to help you save money. Put in the yard drain that moves more water and less labor.

We were using larger and larger aggregate to increase the amount of water that we were going to be able to move. The larger that aggregate, the bigger the void. The problem was once we got to a three-inch aggregate, felt like you were walking on golf balls or maybe even baseball, so that’s no good. We started to use two pipes. When you have larger aggregate, you end up with more void. That’s how you move more water. When you put two pipes in, you probably have the kind of voids that you’d get if you had eight-inch Fieldstone put together. So it’s, it’s just amazing how much water we’re moving.

A lot of people say, how does the water move through this pipe? Is this all full of holes? Well, a pipe lays at the bottom of the trench. The trench fills up, either surface water comes down, falls in the trench, fills it up so the waters at the bottom of the pipes at the bottom or you have subsurface water that fills the trench at, you know from the bottom. Either way you end up with the water in this pipe, in this void. Since it has openings all the way around it, the water can enter it all the way around it. So you have two really large voids. This is going to move more water than you can move with just regular aggregate. You know, whether it’s 6A, anything that’s like a three-quarter ranch. This here moves so much water, two four-inch pipes, they will move 240 gallons per minute each. I mean, think about that awesome. That’s moving, moving a lot of water.

Now they raise the stone, the cost of stone on us, they raised it again and I think the cheapest we can find it now is like 52 bucks. I mean it’s, it’s ridiculous. So stone doesn’t go far cause they sell it to you typically we buy it by the ton. And here we have less void. Now they’re charging us more money for the stone. And I’m hearing it from all our subscribers too. So we started running two pipes and you guys noticed a lot of our subscribers were like what’s the benefits? What’s going on? So that’s why we’re going over this. Well now people are saying, how are you making these connections? Because I’m doing it like you guys and I’ll show you.

So this here is what we use in our French drain grids when we were running the double pipes and all you do is you cut. Instead of having this where the pipe snaps in, we cut that off and then we put a piece of pipe inside. And how we do that is we take a sharp razor blade and that’s it. See. We do that. And then you can snap it inside two T’s. That’s how we’re doing it now.

Sometimes you’re going to run into situations where it’s a WYE. Well, you don’t cut one WYE you keep that just the way it comes. But then you kind of have to heavily modify the second WYE. So I’ll show you. So there’s your double pipe, there’s your double pipe. See you cut right on that line on both sides. And then, of course, you have to cut this off on both of them here. That’s it. That’s the modification and it goes together and stays together. It’s pretty cool.

So that’s how we’re doing it. This saves you money because the stone has just gotten out of hand. The price of stone is ridiculous. Now you can use that half-inch to three quarter inch stone and walk on it and it’s not going to bother you and you’re going to get the voids that you would if you had eight-inch Fieldstone. If you’re running two pipes and you’re moving 480 gallons per minute.

Now slope 3%, 3% that’s what you want. If you can only get two, we live with that, but when you can’t get two, you got to go to an outdoor, sump pump. That way you can slope it down to a catch basin as you see in our all our videos. And I know we tried to build these systems without the outdoor sump pumps just so that there are no issues. You don’t have to worry about the electricity being out. Just there’s a lot of factors that come with a sump pump system. But if you want to move crazy amounts of water, you want a 3% slope. And most people that have yard drain problems, they’re usually in flat areas and there’s no slope at all. And we know and that and that’s why we take everything too… Well, you see a lot of our systems are to sump pumps. I love gravity drains. I always shoot for it. It’s more cost-effective to the homeowner and unfortunately, it’s not practical if you have just a flat yard.

So I hope this helped. And keep in mind less stone means less money, less wheelbarrowing, less labor. So this, think of the voids you’re creating. If you only run one pipe and then you fill your trench full of stone, unless that trench is being filled with three and four-inch aggregate, you’re not going to get the volume. Look at the void. That’s what that’s all about.

So as everyone knows from watching our channel, if you’re, if you subscribe to this channel, the larger the aggregate, the bigger the voids, the more water you can move. You can get away with smaller aggregate and less aggregate with the two pipes.

If you have any questions, if I went too fast or something I wasn’t thorough enough, please just fire away in the comments section. And if you have anything more that you want me to talk about, show you, please leave it in the comment section.

All right, everybody appreciates you to the next video.