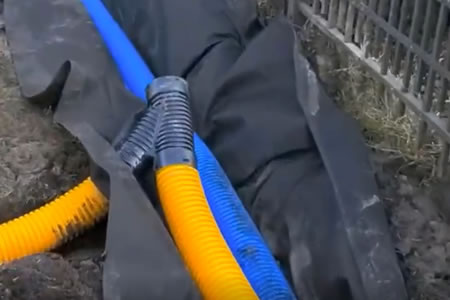 Now notice how we have one, two, three, four downspouts tied into one run of the Baughman Gold and then we’re going to run, this is going to be a yellow pipe on top of the blue all away to the city storm drain. That’s so that no debris can lay in the pipe. No debris will get stuck and hung up in the pipe.

Why is our pipe yellow? Because it is Virgin material. There are no recycled materials. There are no restaurant containers that animals can smell and that’s why they dig up and chew on all that recycled material. They can smell it and they know something about it. Their sense of smell is thousands of times better than ours and they’re going to dig up that garbage pipe and chew on it.

So here we are building a French drain and a roof runoff system in the same trench. Now, remember, you’re going to be moving a lot of water off the roof. You want to use PVC tape as you see here. PVC tape, everything that tree roots and shrub roots might be able to get into. Put the stone on top of both systems and then wrap it. And then your French drain is isolated from your downspout system, ensuring that your French drain is going to last forever.