Why Most Yard Drains Fail

Why Most Yard Drains Fail – Must Watch! 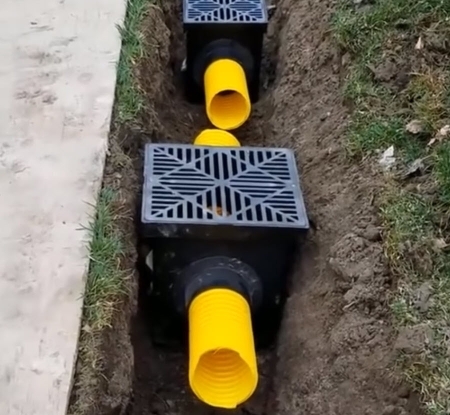 I wanted to do a video on why most yard drains fail. We use these two pipes and we endorse these two pipes. They’re both eight slots. They’re both made by Baughman Tile. One is a custom ran pipe just for yard drains and foundation drains and that’s the Royal blue that you see look at the size inlets. That is the largest inlet that you can find in any pipe right there. A big difference between the blue and the yellow, so we lean really hard on the blue and we love that pipe. It’s called the Baughman High-Octane. I’m wanting to show you guys all the different reasons why yard drains fail. We see it all the time every week we’re digging up failed drains to replace them with ours which are proven three decades and are all working. So here we go.

We did not put this drain in. I wanted to show you what failure looks like. We were at a VIP client of ours that we were planting a few trees late season. You can see the snow on the ground in Michigan and this is a pipe with a wrap, a filter wrap. This is not the right way to do a yard drain. Your stone is going to mix with your dirt and they’re going to plug. So what good is a pipe that doesn’t have any dirt in it if you can’t get the water in it because the stone migrates into the dirt and the dirt migrates in the stone? So one of the biggest sins in yard drains, this is not right for a yard drain. You got to wrap the stone and pipe as one. And I’ve had a lot of people say, well do you still want to wrap the pipe? That’s redundant. Nothing’s getting past the first wrap. If you use a really good filter wrap. We use a non-woven geotextile fabric that is punched and we have it ran through that process and punched twice. That’s why we flow more water.

There used to be just nothing but clay in this yard. Now there’s this great vein of stone to move water. We can put the sod on top of this. We’ll do our burrito wrap and the sod grow just fine. Just cut it off with two and a half inches of root. No dirt back in the trench. You work too hard to get the dirt out. If it was worth keeping, you wouldn’t be there in the first place because soil with low or no percolation is that’s the jobs that we’re on. Okay?

Now here, this is perfect. I love this. This is great. So some guy’s gonna write you up a quote and tell ya, I’m including five inlet basins for the bulk water and I’m going to have a four-inch pipe and carry it out to nowhere because a lot of these drains literally go nowhere.

So here we go. So the frost heaves these basins in Michigan. This is not Florida, we can’t do this. The basin heaves. That’s why we use blind inlets. And I’m starting to show you more and more how to incorporate a blind inlet. The frost will even heave the pipe and I just showed that really quick in that clip there. But that’s a joke and it’s a scam.

Okay, so this is like the talk, right fabric. Is it worth it? Do you know which one do you buy? You have to have a non-woven geotextile fabric and you can’t just go on Amazon. You just can’t buy the cheap stuff. You have to buy good punched fabric. Now we started to sell ours online to you guys because we run ours through a process where it’s punched twice. Now, there are no tricks here. Everybody wants to, you know in the comments section, talk about, Oh, it’s concaved so now you’ve got twice the surface area. I really don’t care if I’m holding a fire hose to this thing. It’s going to take the water. The buckets full so now it’s overflowing. So I’ve proven it time and time again. Our fabric works better than any of the other fabrics on the market. It has a crazy strong tensile strength, which is incredible because we’ve punched it full of so many holes to bring up the flow rate and it still maintains its strength.

So over and over and over again, we got to keep proving to you guys why our drains work, why our drains last forever. And I’m going to put all these videos together in one just so that you can review them when you put in your yard drain or hire a contractor to make sure he gets the right fabric. He gets the right pipe. He’s using the right stone. He’s hauling away all the dirt, all the things that we’ve talked about. Video after video. I want to put a video together just so that you can save this and share it and have your contractor watch it. And if you’re a DIY guy, this is a great one to lean on so you don’t make any of the mistakes.

So you want to wrap your stone and pipe in just one fabric. Don’t wrap the pipe. That is a sin in yard drains and it’s going to result in an early expiration date on your French drain system that you work so hard to do. Your yard drain system. These things are exhausting. I’ve talked to tons of DIY or is it said your videos have helped me so much. I built three drains now and my yard is dry. These systems rip. But they do also say if I had to do it again, I’d rent probably a mini excavator. I see why you guys use a backhoe like that. So you know, just another helpful hint. You know, sometimes you got to put a value on your time and sure, I know as a couple of hundred dollars to rent these machines, but your time is worth something too in the end. But as long as you follow these basic tips, a really, really good filter fabric is key. I know I keep driving it home with you guys but buy a good filter fabric that’s punched. And if you want one that really has an insane flow rate, we run ours through that process twice. We pay more for it. But we get it punched twice. There’s thousands and thousands and thousands of small little holes. If you take our fabric and you hold a magnifying glass up to it, you can see all the holes in it that have been punched to increase the flow rate.

All right, so now onto the next video. Okay, so we’ve talked and talked and talked about these basins. You see how high that yellow pipe is off the ground. So the bottom is going to be full of water. The water has to get all the way up to that pipe before it flows. So in Michigan, this is a big no-no. In the North are our Canadian subscribers, you can’t build them like this. They freeze solid with all that water on the bottom. So then when you have a thaw above ground when you have pipe buried beneath the surface that is insulated, it takes not just hours. It takes days and days longer. When we go through a thaw for the thaw to go ahead and penetrate the frost and actually melt the water in this trench. So I get a lot of comments in the comment sections, especially from you, Sunbelt region installers. I’m telling you up here in the North, we can’t build them the way you guys do. We gotta be conscious of draining this trench. It’s very important that we drain just right to the bottom of the trench. So we like our pipe right to the bottom.

Now, look at this. These guys do this all the time. They’ll just take a pop up right at the storm drain. Homeowners do not hire a contractor that does this. You’ve got a core through the sidewall that that’s the only way you’re getting the water out. There’s no secret, there’s no nothing. I mean, it’s not going to magically just be able to defy gravity and levitate up into that grate of that storm drain catch basin. It’s just not going to happen. You’ve got a core through the sidewall and that’s the only way you empty out this trench. Otherwise, it stays full. By the time there’s water coming out of that popup, your trench is fall and it stays full and it freezes in the winter.

And then all these different things we’re digging up. We’re tearing out so many failed systems. It’s just exhausting. So many shoemakers in these backyards. And I feel so sorry for these people. I mean, time and time again, we’re just every week pulling up failed systems. Yet 33 years, we have not had one system quit working and we follow the very same recipe in the very same blueprint time and time again.

So I hope you guys learned a lot from this. These are all of the reasons why yard drains fail.