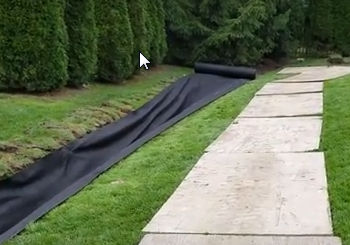 Now we never use a pipe with a sleeve or a sock on it. We use a pipe that has no rap, that’s because we wrap the entire trench. The stone and pipe included all as one. The stone is going to try to migrate into the subsoil. The subsoil is going to try to migrate into the stone. So you need a soil separator. You want to wrap the entire system as one. This will preserve the system and this will make the system last for decades. Also, we put our pipe right on the, uh, this is a non-woven geotextile fabric. We lay it right on the bottom of the trench. The reason why we do that, we’re 18 inches deep. That’s where the tap is. We want to get all the water out of the French drain. We don’t want water to lay in the bottom of the French drain to freeze, come wintertime when the frost goes to this depth and we can get away with it for a couple of reasons.

One, we’re laying it on the fabric so we’re not laying in the dirt too. This is not a pipe for building a septic field where you just have a couple of holes and align of have a couple of holes at the bottom. That pipe is designed to where you want to put stone down first, then put the pipe on it, and then more stone after. We have a pipe that has eight slots per valley, so we have eight inlets. They go around the pipe.  So, you can just see all the inlets. This pipe has eight slots per valley. There’s so much inlet for this pipe. It’s mad crazy from the sides to the top, so laying it on the bottom not affect its performance and because of the non-woven geotextile fabric, we’re not gonna have a clog. We’re not gonna, we’re not laying it on dirt. We’re building our system fully contained.

This system needs no maintenance. This system’s going to be a wrap system. It’ll never get any contaminants in it because we’re not going to put in any inlets. We’re not going to put in any drain catch basins. The guys that use those drain catch basins every so many feet when they use the NDS easy flow, they have to put a catch drain every 10 feet to get the surface water because that beanbag that they call a French drain, all it does is grabs up subsurface water. Well, ours is like a giant channel drain. We cut the sod off with two and a half inches of root and dirt. That’s enough for it to grow over this filter fabric.

This entire system will take in the surface water. We can lay this side overall this stone. We’re going to take stone right up to the top, leave just enough room to put two and a half inches of dirt inside back in. When you do that, all the water that comes down into the swale just runs right through the gravel and then into the storm drain catch basin.

There’s no better way to drain your property than a stone French drain. As far as comparing this to the Easy Flow, the NDS Easy Flow at beanbag that they call a French drain. It’s a bunch of styrofoam wrapped. You know The Home Depot one is like seven inches in diameter and the professional one is a little bigger in diameter, but when you fill this up to the top with stone and water can just run right through the gravel into your French drain system, into the storm drain catch basin. It’s like having a giant channel drain. There’s nothing that moves water more efficiently and faster.

Now, when you go ahead and you try to build it out of one of those beanbags, the Easy Flow that NDS has, that’s for subsurface water. That does not tackle surface water. In order for it to tackle surface water, you have to put in these inlet basins. What do the inlet basins bring in? Oh, grass leaves, dirt, debris and ends up clogging the system, and every 10 feet you have an inlet basin.  With an all gravel drain that’s to the surface like this, that’s wrapped. You’re taking in the water throughout the entire system. You can’t beat a gravel French drain.

For the very best gravel French drain built in southeastern Michigan, give us a call at 248-505-3065.