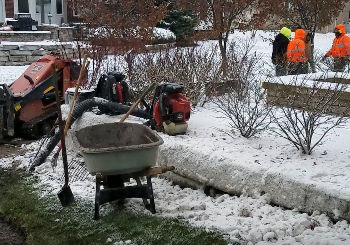 We’re installing some shrubs and some trees for some privacy and I wanted to show you why French drains fail. We blew the snow off the sod and then cut the sod out so that we can excavate the side and a snow. Both will act as an insulator. New Construction right now it’s to frozen to work on, but where there’s turf in some snow. It’s great.  Now, this French drain was put in this year and it wasn’t by us. I want to make that clear. We did not install this French strain. I’m using this as an example of what not to do and why French drains fail.

We just cut off the side and you can see the pipe is at the surface. This is a shallow dig. You can see that they did not use a Geotextile non-woven fabric to separate the stone from the subsoil so the stone could migrate into the subsoil. The subsoil can migrate into the stone. The French drain plugs right here. Instead, they used a pipe with a sleeve or a sock on it and then just dug a narrow trench, a shallow, narrow trench, put the pipe in it, went ahead and just poured some pea stone over it and then lay the grass back over top.

So a system like this, I asked the homeowners did it work, you know, from the time of new and the homeowners say, yeah, they could tell a difference in the beginning, but they say then it just seemed to work less and less until it fails. So failure for a drain like this, I mean this would work a little bit in the beginning and slow down continuously as this migration of the stone and the subsoil occurred and that’s where the system plugs.  And then after about two years, that’s when they say two years’ time, they didn’t work at all. They slow down after the first year. You can tell that there’s definitely a difference and two years later they just quit and this is why they quit.

So this is why I always recommend not to use a pipe with a sleeve or sock on it. Instead, you want to wrap the trench with a Geotextile non-woven fabric. You want to wrap the pipe and stone as one and that way you can separate the soil from the stone and the system will last forever, but the way this one’s built, it’s not a deep enough dig. It’s a shallow dig. There’s no Geotextile filter fabric to act as an oil separator.

The fact that they used a sleeve or sock on the pipe. Sure. So this pipe ain’t gonna plug, but what good is a pipe that’s not plugged if you can’t get the water to it because as soon as the soil and stone migrate into one another, it plugs there. Now the water can’t get to the pipe. So what good is a pipe that’s not plugged? I understand the thought process behind it. Understand how contractors get caught up in this, but you have to wrap the stone and pipe as one use the pipe without a wrap and wrap the entire system. Stone and pipe included. That’s how to prevent French drain failure.