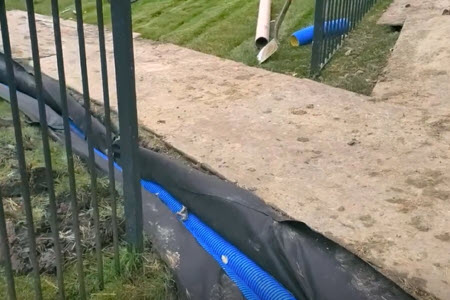 Welcome to the French Drain Man channel. I’m Robert Sherwood and I’m here to talk about PVC pipe and how it doesn’t belong in yard drains. We have four of the Baughman High Octane. It’s got inlet like monster inlets, and they’re 360 degrees. They are all the way around the pipe.

So then we have this, this piece of PVC schedule 40. Now it’s got two holes on the bottom. Now we have four pipes in here doing more, creating more void, moving more water than the stone itself. This is why PVC sucks. Look at that thing. It’ll do you no good. Where’re the inlets? On the bottom. So you have to put this at the bottom of the trench. Unlike the High Octane where you can set it right on the fabric, this has to have three to four inches of stone under it, which means you got three to four inches of water left in your trench. That’s no good. Why? Because trees can sniff that out. Trees can sniff that out and your yard drain is going to get compromised. It’s going to work a little less each year until one day it doesn’t work at all. And you’re going to say, man, I worked really hard putting my system in and I just don’t get it.

When we start getting hung up on a crush rating on a crush rating, how does the crush rating of a pipe make a better yard drain? It doesn’t. It doesn’t. That’s why we use this thing for a sleeve only. We don’t use this in yard drains. Once in a while, if we got to sleeve something, yeah, I’ll get some six or eight-inch and I’ll run our four to a six-inch corrugated pipe. through it. It doesn’t bend. So don’t make turns. I mean I can go on and on and on. And as far as crush ratings are concerned, well you know, I’m a pretty big guy. I mean, you know, 230 anyways, no deflection. There are four pipes in here and well I can, I can even concentrate and put all 230 on one leg. I’m telling you this stuff don’t deflect. This pipe is incredible. It’s incredibly strong. Baughman Tile wasn’t fooling around. They knew when they made the eight-slot that it better be some heavy wall pipe. That’s why it’s the heaviest single wall corrugated pipe in the world. It’s the strongest pipe and it’s the most inlet.

This here with its incredible crush rating so that you can drive, I don’t know, semis through your backyard repeatedly over and over and over. It’s a joke. So you put one of these on the bottom with three, four inches of stone underneath it. Now your system has water in it. Now the trees sniff that out. Now you just built a system that has maintenance. You’ve got to run through this thing. So everyone says, Hey, you know you want to build it out of PVC cause that way you can clean it out. Well, guess what? We build them right. They don’t hold water so the trees don’t overtake them and they don’t need to be cleaned out.

As far as the guys that are saying, Hey, I got no slope, I got no slope. Right here’s your system. Why is that? Because you can wrap our system and it can be level, and as long as you’ve got an outlet at the end of that line and then put four pipes in, you’re gonna move more water than stone.

Far too often I see homeowners with one coil of pipe. No, you need to fill your trench. This, we’ll do more than stone. All the water is going to run right through these top pipes into the bottom pipes and right into that storm drain.