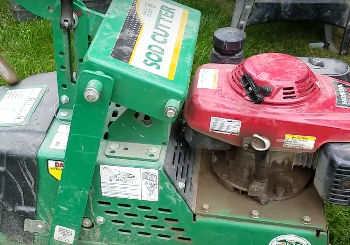 It seems to me what’s happening is…  I don’t know if it’s laziness. I don’t want to say that. I don’t think it’s out of laziness. I think it’s they don’t know any better. Somehow they ended up renting a trencher. Then probably eventually buying a trencher. They went ahead and they trenched it out. They put a pipe in. They weren’t even thinking about it. I know that guys that have been doing it for a long, long, long time don’t remove very much dirt if any at all, and they don’t put enough stone in.  Because when you trench, you only end up with a six-inch groove, so you put a four-inch pipe and it doesn’t matter how good the pipe is at that point. You just don’t have enough drainage. Water run through.

Now we use an eight slot, eight slots per valley, and these are saw cut. You can stick a quarter a US quarter in those.

So, our pipes drain.  Now I could give you my pipe and you could run out with a trencher and put it in like I see the guys. It’s not going to do much for you. That part ain’t going to change in order for that pipe to move the kind of water that it can move. It’s capable of moving. You need a lot of stone.   So that’s the number one thing and guys are ill-equipped and they’re using a trencher.

Another thing that gotta give a shout out to the guys at ditch witch of Michigan. They take good care of us. They keep us up and running. They ran me out of an attachment to Algonac, Michigan yesterday. Unbelievable. Thank you guys. We appreciate the shout out.

You have to be equipped though. If you’re not willing to invest like we don’t use a trencher sod off. We cut the sod off so that we can do a clean install.

Now, this is a very flat backyard, so we did parallel drains back here. You can hardly tell that right here, they pieced the sod back together,  You can see this is why we had. That’s how well when you take a sod cutter.

Now the other thing that the guys are doing wrong, things that I see are a problem in the industry, not using it enough stone, and even when they do get this far, they can’t haul out all that dirt, so they kind of cheat and they know they’re cheating, they know what they’re doing, they’re putting the dirt back in so they’ll put some stone and over the pipe and at some point they start putting dirt on.

Well, when you put dirt over a French drain system, you get away with it initially.  You will get away with it in the beginning. Why is that? Because the dirt is very loose so the water would run right through it, but I’ll tell you what, gift that soil time to get compacted and it’s over. That’s it. It will no longer work. That drain will now no longer work. That’s why you see guys putting inlets, these inlet drains. That’s a sign of a guy that’s building you a really, really bad drainage system. Don’t go with a guy who was using inlets.  There’s a rare, rare, rare time that you use an inlet.

Now you can see the sprinkler system. We just basically cut the pipe cleanly. We take a coupler in, put a coupler in, a clamp, and then we do the repair. You’ve seen sprinkler lines in my previous video.  You can see that we just reconnect them with a trencher. You’re tearing through everything. It’s very invasive. Your yard needs seed or side and then there’s a lot of settling because they’re putting back all that, all that loose dirt in.

So these are the mistakes that I see the contractors making some out of laziness, all of it out ill-equipped equipped, that’s for sure. Now, how does that result to, you know, for the homeowner will sadly, they end up with a drainage system that expires, a drainage system that has an expiration date. I hear these guys say are my drains go with five to 10 years? And then they watched my videos. Yeah. All my drains go 10 to 15 years. Now there are 15 to 20 years. Yeah, whatever. Okay. That’s why I’m replacing your drains after two years.

So, for a drain built right the first time, the contractor needs to haul out all the dirt, put none of it back in. Needs to bring in plenty of stone and not do the job with a trencher.  Be equipped.