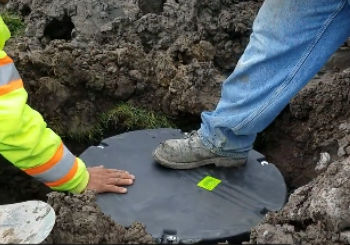 We’re on Lake St. Clair and we’re in Chesterfield, Michigan on a lake lot. We’re setting a six-foot lift station. We went around this home with a curtain French drain because water was finding its way into the house and we built a curtain French drain. We’re taking all the water to this lift station where we’re going to pump the water and lift it up and over this block wall and out to the lake. It’ll just run right off this. This is a for lawn chairs sunbathing.

Show you what we have a real quick. This is already done. There’s a six-inch pipe where I’m walking and there’s a couple of four-inch pipes for the downspouts. We cut the concrete right there and we, put a clean out. So there’s some big trees. We want to make sure that if for some reason we got to clean that out, that runs right into the open French drain and it continues on a four-inch pipe.

Everything’s isolated because of this. when the house is flooding and every time it floods, they got a big insurance claim. You can’t screw around a situation like this. This was built in three phases, so we have the center of it that’s on a slab, and then the rest is on a crawl. Now the center of this right here, that part of the house inside is six-inches lower than his concrete on the outside.  So, that’s what we’re dealing with.