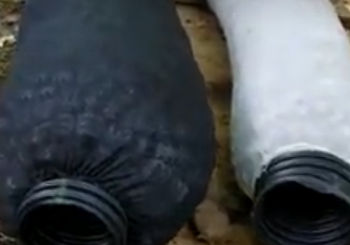 EZ Drain installation. I am going to go over a few tips right here for you for when installing EZ Drain by NDS. I don’t recommend what they sell at The Home Depot. It’s a really weak pipe.  It’s actually the weakest pipe that I’ve ever seen, to be honest with you.

Look at the difference here in these. These are both NDS, EZ Drain. This is the contractor version. This is sold at SiteOne. There’s a SiteONe location in 44 states. If you’re watching this in the US, there’s a pretty good chance there’s a SiteOne near you.

Now, this has some ribs for strength. I don’t know if the material thicker, but I don’t have a problem with this pipe. It is 4 slot staggered. I’ve covered that in previous videos. This is the same material as what they’re putting on pipes that are sleeved or socked. You know how I feel about that. I’ve covered that in previous videos. I’m going to show you how to use this product and have success.

Now what’s nice about this contractor version, you could buy it to where the pipes near the bottom. That’s the way I like it and there’s more aggregate on top. This isn’t as big as my stone systems, but it’ll move water. I’ll endorse this. I, I’m not going to use this and I’ll get to that in a minute, but if you’re a homeowner, you don’t have a dump truck, you don’t have a trailer, don’t have a pickup, and you can repurpose the dirt in your yard somewhere. You can dig a trench, repurpose that dirt somewhere, and then buy this at SiteOne and line the trench with a good filter fabric.

Make sure at the joints as I’ve covered in previous videos, this is the worst part about the whole deal. You need to put something that’s going to not choke off your system, bottleneck the system, so you need something that the water’s going to run through. If you want to stick to the gravel free, they sell this without a pipe by one without a pipe. Just rip this material and go ahead and take their poly rock and pack it really good and then fold your fabric over.

Now, when I dumped stone in my drains, they pour to the shape of whatever it is I dug out, whatever I dug around. If I’ve got to dig around a three-foot boulder, if I got to dig around in an old stump, whatever it is, it’s going to just pour it to the shape of it. To my point, this was dug with an excavator, which means this has a square, this a square trench with a shovel it would have been more rounded. That’s why this is really ideal for a homeowner or a contractor that’s not very well equipped.

We put in thousands of systems. We pour rock and it pours around the pipe, and if it’s square like this, because this was dug with a machine, it’s not an issue. This is round those square corners, the dirt has to slowly undermine. You’re going to get a lot of settling, so NDS does recommend that you build this up like six inches to avoid saddling.