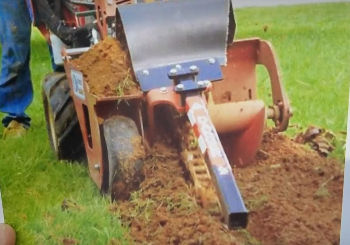 To build a French drain to last, you have to remove a lot of dirt. You’re going to have to use a backhoe or an excavator or be willing to do a lot of hand digging, that’s for sure. One thing that I strongly, strongly I’m against and that is a trencher. The use of a trencher is very invasive. You can see how it just cuts up the turf. It cuts through the sprinkler lines and makes a mess in general. How much dirt is it removing? You end up with a narrow trench you put a four-inch pipe in a groove that’s about six inches and he got a couple inches of stone. Then these guys don’t have much dirt to haul out if any at all because then they pile it and lead it, bumped up high and tell you it’s going to settle because they don’t have any way to haul it out with their vans.

For a French drain system built to last, you need to remove a decent amount of soil, significant amount of soil. You need a large channel so that you can fill that channel full of stone. The more stone, the better the drain. I can’t emphasize that enough.  Give us a call at 248-505-3065 for more information on a French Drain System in Southeast Michigan.