The Anatomy of a Gravel / Stone French Drain Installation

The Anatomy of a Gravel / Stone French Drain Installation 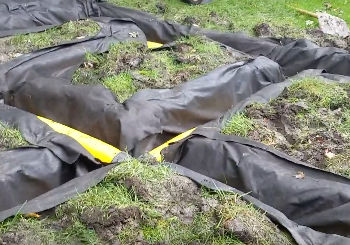 We are installing a stone French drain or a gravel drain. That’s the catch basin we cored through the sidewall and connected to.

This is a French drain grid. This entire area was completely saturated, it’s really flat.  If you tried to run just a single pipe through here, it would only have firmed up the ground in one location. When you have an area like this, we do a lot of these, but this is the first time I did a video on the anatomy of one. I wanted to show you a couple of things.

So you’re gonna need a lot of T’s as far as connectors with a system like this, and then when you’re shopping and you’re ordering your parts, that is known as a cross T, so that’s what it’s called. It’s called a cross T, so you’re gonna need to cross T’s for the intersections. You have to go under the sprinkler pipes. It’s okay to put the pipe right on the fabric when you’re using fabric when you’re using geotextile, nonwoven drainage fabric, you can set the pipe right on it. The guys that aren’t using a Geotextile fabric, they have to put stone down first. You can’t just set the pipe down on the dirt. That’s going to be a problem. So we have four pipes running in this direction and then it’s made up of three pipes in this direction. They all end up going to that storm drain catch basin.

Basically, what happened here, all this beautiful landscape for privacy and the water can’t get out. So the greenbelt just ended up soaked and saturated.  It’s hard for the guys to maintain it who were mowed the grass.

We talk about cutting the fabric so that you’re not overlapping it. You just want a couple inches to overlap. The guys already did that. They cut the fabric, it’s ready to go. They cut it and pinned it back. Here’s our scrap pile. So once they put the stone in, they’ll be able to just take the pins that are holding the fabric back. You can do the stitch over the gravel.

Notice how there are no inlet basins. Why are there no inlet basins? Because you don’t need any. They just end up filling the system with contamination. When you have bark mulch and grass blades just all this organic material that just turns into, well, it turns into a great topsoil or planners mix, but don’t work well when it’s in your pipe.

This is a fully contained system that we build. As you can see in our previous videos, the way we put the stone in, we pin back the fabric and then we just put the sod down with just two and a half inches of root and the water runs right through this.

This is basically like having channel drains all throughout the yard, but without the unsightly channel drains.  So, to put an inlet drain in the system would be pointless. It’s taken in water. It’s this system here was designed to take in surface water as well as take care of the subsoil water and firm up this yard.  So, no one let basins as you can see, the guys that are using inlet basins is because they build really lousy systems. They’re telling you, well, this will take care of the subsurface water. Well, what about the surface water? As you can see, the way this landscape was all bermed around here before we tunneled under the fence to that storm drain catch basin, you needed a way to get the surface water the heck out of here.  So they’re going to put a couple inlet basins that doesn’t work that great, and then they’re just going to contaminate the whole system.

Now, one-third of our installs, so one out of three and that’s a pretty high statistic. We’re replacing a failed system. Now. This is pinhole. I’ve covered it in previous videos. I’m not going to blame the failure on the pipe. I don’t like the pipe just because it doesn’t move the water as fast as I want to move the water. I think this, this pipe has its place, but I don’t feel that this is a good pipe for a residential job. I can see why the farmers use it. I would use knife cut over pinhole, but what happened was they put this pipe in the ground and they put a little bit of stone and they didn’t wrap it with Geofabric. They did not use a geotextile nonwoven filter fabric. The system quit and what’s unfortunate is the homeowner paid to have this service provided they needed yard drainage.

For a stone French drain done right the first time in southeastern Michigan, give us a call at 248-505-3065.