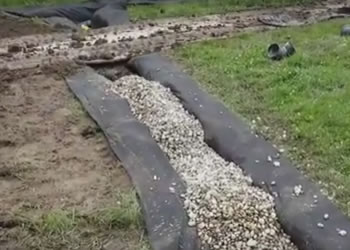 As you can see, we have a French drain channel running in the perimeter of the property, the entire property. We went around the shed.

We have a balance tube connecting both sides. That way we can equalize the pressure. Balance the water in which these two French drain channels are carrying along the perimeter