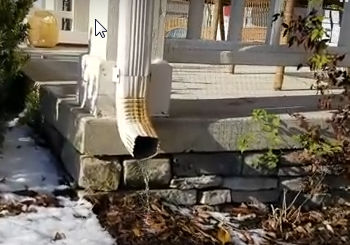 We’re in beautiful Oxford, Michigan installing a French drain system and we’re running underground downspouts. I wanted to take this time to show you what to look for as far as how much water each downspout is responsible for and as far as roof runoff when you’re dealing with sheet water. And I also wanted to use this opportunity to show you how when you have a blue sky, no clouds and direct sun, I wanted to show you the power of radiant energy.

It’s in the low twenties, yet the suns out and it’s just melting all the snow. So this gutter trough appears to be rather short and you would think that’s not a lot of water for this downspout. However, the second story always dumps into the first story gutter troughs. That’s the way the systems all are. So keep that in mind. If you have a two-story house, if you’re a DIY guy or if you’re a drainage contractor.

You can see here we are again, you know it’s in the low twenties, 23 or 24 degrees right now. And you can just see how much the snow has melted off the roof and how much water’s coming out of these downspouts. And we’re 10 degrees below freezing. Again, the power of radiant energy. Here we go, direct sunlight.

So this is where we end up in trouble. Say this was happening and we were another 10 degrees colder. These downspouts would just build up with ice because the metal is so cold as the water runs off the rooftop, it just freezes them solid.  That’s why you hear me say, I don’t care what you pipe this with, it doesn’t matter if it’s SDR pipe. It’s gonna crack here in Michigan. That’s why we use dual wall corrugated pipe or single wall corrugated pipe. It expands when the ice builds up, it’ll expand and when it thaws it contracts. So some great examples.