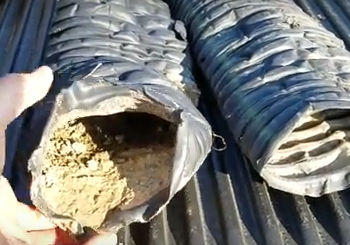 One of the questions that people ask, and it’s a great question, is why does drain tile and in a farm field work and why can’t we just do that in our backyard? Well, it rained a couple of days ago and you can see the drain tiles working on this farm, but you can see it’s slowly working. Most people are not going to be very tolerant to ponding and pooling in their yard for their dogs are run through and their children to have to play in.

So we have to build a system that moves the water much quicker, much faster than the drain tiles that are designed to drain agricultural properties.  Plus they do have failure too, and let me explain.

I happen to live in an agricultural district. My background, I’m a licensed builder. I’ve built commercial water features, things that had to withstand the winter in Michigan so that come spring, you could fire them up and they ran properly. Outdoor kitchens and bars, outdoor living spaces, indoor plumbing. So I do build a hybrid system and I. I’ve taken a lot of things from the farmers.

So here I want to show you something. They’re doing a development down the street, which means they’re stripping a farm and they’re developing the property. So I went and picked up some of the drain tile that’s been torn up out of the ground.  And you see how, oh, it’s full of dirt.

So here’s what I can teach you about the farm.  When you do agricultural, you know, acres and acres and acres, agriculture, property, new tile, and you’re not using the stone. Basically early on, early on, the first several hundred feet, there’s not very much water. So you’re going to build up a lot of dirt. But as you get further and further and further on that run, they have run so much longer than what we do residentially that eventually, they have enough water to wash the sediment out.

Now like this piece has some dirt in it, but it’s not as bad. It was further down. You know, when they start running 2000, 3000, four or 5,000 feet of pipe, now it’s coming out like a firehose towards the end from the water that’s collected.

Now if you have a affirm was sand, you know, you could run, you know, pin-holed, don’t use this for residential. Just doesn’t move the water fast enough. We can go back to that opening shot where there’s water standing and it’s taking days for it to finally make its way into the drain tile.

Now here’s another piece. This was early in the run on the farm. It’s completely plugged.  So at some farmers will do either in like real flat spots where there’s no slope or the beginning, they’ll run a wrapped pipe to prevent that and then go to a pipe with no rap, you know, just for economics. But for a residential system to move water fast, you have to have the stone and for it to last, you want to wrap the stone and pipe included. You want a burrito wrap it, have it fully contained.