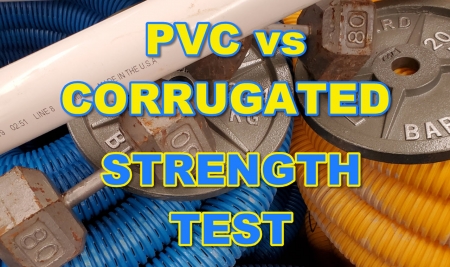 All right, we’re going to put the PVC Schedule 40 through a torture test. Now, I talked to all my plumbing buddies and I said, how can I make PVC Schedule 40, that’s the heaviest wall out of anything you’re going to find in like Home Depot, Lowe’s, Menards, I mean PVC Schedule 40 that’s kind of what sets the standards on crush ratings. You know, we like to talk about crush ratings because they mean so much in yard drains. They mean so much in roof runoff. So what my buddy said was, look, cut a piece of PVC Schedule 40 and slide it into fittings. This doubles it up. Talk about strong. This is a clean-out. Another short one here. Doubled up, strong band. This is the longest stretch at 12 inches. Doubled up, doubled up.

So you know, I definitely gave the PVC Schedule 40 a huge advantage. I imagine this thing’s going to be pretty indestructible and we’re going to have a hard time finding anything, anything that could harm a pipe with such a high crush rating. Since crushed ratings, again, are just so important in yard drains, roof runoff systems and French drains.

All right, so now the contender, the PVC schedule 40 comes in at 22 pounds. The contender yellow pipe, Virgin yellow, weighing in at two pounds. So PVC Schedule 40 has quite an unfair advantage if materials are doubled up as well as it’s got 20 pounds on the yellow pipe.

Now, the yellow pipe is a Virgin material. That’s why it’s yellow. The yellow and the blue pipe, it’s Virgin. That means there are no additives. See the black pipe that’s recycled material with a lot of additives because it’s super tough to get soap containers, restaurant containers, every single thing that you can possibly picture as recycled material gets ground up and it looks like a box of Crayola crayons. They then fuse it together with additives and no way is it as strong as the yellow pipe or the High Octane in blue.

So I got about 30 tests that I want to put these two pipes through. But if the yellow pipe doesn’t pass the first one PVC schedule 40 will be our winner. So let’s get started.

All right, so for our first test, I did something that two-thirds of the United States and all of Canada experience and that is a freeze up. What I did is I filled up both pipes with water and capped them on both ends so that the water couldn’t escape and I put them in a freezer. I know that everybody’s always wanting to know the crush rating of corrugated pipe. Yellow pipe. What’s the crush rating? And everybody’s talking about crush ratings. PVC Schedule 40 has such a high crush rating. Well, I’m going to show you guys a test between corrugated pipe and PVC Schedule 40 which is the strongest pipe with crush rating in Home Depot. I froze them and you can see what happened to the PVC pipe. When you have a freeze-up in Schedule 40 PVC, it’s crush rating is its weakness. It has no give. So during freeze-ups, it breaks.

I dig this stuff up out of the ground all the time. I have hundreds of miles of this stuff passing through our dumpster. I mean it’s unbelievable and we’re replacing it with the corrugated pipe. So two-thirds of the country see freeze-ups. All of Canada. This thing weighs a lot by the way. And yellow pipe here, it just blew up like a balloon and that’s what it does. We have no crush rating on this pipe, but what we do have is these physical properties that rigid pipe can’t give you. Even when the ground settles around the new build. It could be a shopping mall, it could be a home, PVC Schedule 40 when the ground settles, it cracks. The corrugated pipe doesn’t. So I love corrugated pipe for new construction. I love it for in the North I’ll use it anywhere, anywhere, it doesn’t matter. It could be Hawaii I’m using the corrugated pipe. So you can see where this cracked even where I doubled up the thicknesses. I took PVC schedule 40 and slipped it in a PVC schedule, 40 fittings, so we have double the thickness and the cracks still went through two layers of this.

Remember PVC Schedule 40 and it’s high crush rating and you know, a freeze-up, a freeze up, it doesn’t stand a chance. So there are different things that I will use. PVC schedule 40 for, I like to be below the frost for sure if I’m going to use it for sump lines and when we do have to use it for code for sump lines, we’ll go below the frost. If we can’t get below the frost. There are some things that we can do to protect ourselves from this, but there are no guarantees. Again, it’s so rigid that it has no give.

So this is ideal for your indoor plumbing. That’s where you see this pipe used. Look at those cracks where it’s doubled up on the fitting and it has a piece of pipe inside it. It split it. There are cracks all over this yellow pipe, by the way, didn’t have any tears, rips nothing. I mean it looked brand new. Matter of fact, I’m going to use it on a downspout. It’s a good pipe. It’s in great condition. Or I might freeze it another 29 times. Just to show you guys, this stuff is indestructible. So how do you give that a crush rating when it has properties that rigid pipe doesn’t? You know, the steel pipe doesn’t have the properties that the corrugated pipe has. So just trying to help you guys out because it’s exhausting on my end trying to explain it. So I’m showing you.

So here’s a yellow pipe. Look at that corrugated pipe, it’s all blown up. Now, remember, Baughman Tile, their yellow pipe, and their blue pipe is all Virgin material. So when you’re not using recycled materials, it’s strength and longevity is greater. So that’s why we like the yellow pipe and blue pipe. That’s why you see us using High Octane and the Baughman Gold, they don’t have any recycled materials in them. No restaurant containers. Everything that’s in your recycle bin. Just think about that. Everything that’s in your recycle bin that gets ground up and put in that pipe on the shelves at Home Depot. So you could see this Virgin material, it stretches right out. It blows right up. Not a crack, not a split. It’s a little frosty on the outside, but that’s about it. It’s in great shape.

So now you guys know why I love corrugated pipe over PVC Schedule 40 and it’s just been driving me nuts. So I actually took our brand new freezer before we loaded it up with food and I did this for you guys. All right everybody till that next video.

All right, I’m going to show this after the test so that it’s not a spoiler, but I thought you guys would appreciate it. So this is my wife’s brand new chest freezer. We haven’t even used it yet. So since it was empty and she hadn’t gone to the grocery store yet, I took the opportunity to do our first torture test.

Okay. So you know I, I have the PVC Schedule 40 and I filled it up with water and then I have the yellow pipe. Well, yellow pipes in trouble, man. This is crazy. I can’t believe I’m doing this. I mean I’m showing the world just how strong PVC Schedule 40 is with its incredible, amazing crush rating even though it’s not easy to work with and it is expensive. And every time you glue a fitting, you gotta wait for it to dry. And I don’t know, yellow pipe, you know, you snap it together dry and you put some PVC tape on it and it’s fast, it’s affordable and it’s effective. But it just doesn’t have the crush rating that PVC Schedule 40 has. You know, because somebody was telling me that Fruit Loop drain had a hippy day acid flashback and he like threw a cinder block at the yellow pipe. I mean, you know that’s a realistic, very realistic demonstration in the real world.

Now, I chose to do a comparison test that is very real and that’s when pipes freeze up. So you can see these pipes are in perfect condition.

I don’t know how I’m going to get them out of there after they freeze. Especially yellow pipe because it was a lot longer than the PVC Schedule 40 I had to make a big horseshoe out of it and then push it down in there. So I’m a little bit worried about this. I mean PVC has such a high crush rating. I mean, I don’t know man. I mean, you know, Fruit Loop drain, you know, he says it’s a joke. I mean, Virgin material, no additives, you know this. I don’t know. We’ll see. All right. We’ll come back in a few days.