Pump Stations, Lift Stations – How They Work To Drain Communities

Pump Stations, Lift Stations – How They Work To Drain Communities 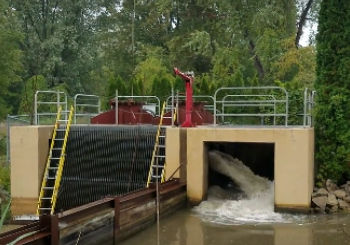 That’s pump one. This is a pump station. It’s designed to where there’s alternating pumps that pump the water. What a pump station does, well, in this case, we have done a lot of drainage in the area. All the properties that we built drainage systems for go to this drainage ditch. When the water reaches a certain level, it starts to go into the pump station through that grate. The reason why there a grate is so that no debris can get in and plug the pump station, like a big log or something like that. So you can see how the water is pouring through this. We just had a pretty good rain, so there’s been a lot of water feeding this drainage ditch. So this thing is going to be pretty active for a little bit here until it catches up.

Now, look at the water line on the dam. Let’s go to the other side here and look at the water line. Quite a bit of a difference. That’s what a pump station does. In order for the properties on the other side of this dam to stay dry, to protect those homes. Here comes pump two alternating pumps. So there was pump two, and it’ll alternate between pump one and pump two like this.

In the event that a pump should quit, the properties won’t be flooded out. That’s the beauty of an alternating pump system. This is a commercial pump station. Where’s all this water going to? It’s going out to Lake St. Clair.

Now the lakes here in Michigan, there are at record highs. We haven’t seen the lake water this high in 30 years. They’ve been really high the past couple of years. This pump station had not been working for many, many years and a couple of years ago it just started. It just started pumping water with literally no notice.  The boats that were tied up on the canal, once this water started, started to be pumped. The boats there were, there actually was some property damage over that. There was this no notice once, once we reached a level to where it was going to be catastrophic to the homeowners.  You know, we’re talking massive insurance claims, you know, homes being underwater. Well, as you can see, there’s, when you look at the one side of this dam, and you look at the, the other side, I mean, it’s pretty amazing. They’re able to control the water. Look at that.

Now, right there, you can see the two islets. They can lift that if they want. There’s pump one again, so this is an active pump station. You can just hear the water going through that grate filling the reservoir inside the pump station.

As long as they’re a place to take the water to you obviously need somewhere to discharge all the water. I’ve seen a rare case to where there was nowhere to discharge the water and the person is left with no options at all, but it’s rare. You know that that truly is rare.  But in my contracts, I tell them, people, look, my system, the only way it fails is if whatever’s controlling the drainage ditch… Say this pump station. Both pump one and pump two failed, properties would flood my systems. All the water would just back flood up into our systems, so under like a catastrophic failure, there are cases where your yard drainage system wouldn’t perform well if you take your French drain, for example, too. There it goes pumped two again. So again, alternating from pump one bump two.  Look how much water that thing move was amazing.

If you take your French drain into a ditch and the ditch backstop, the water’s gonna backfeed into your French drain system. Your yard is going to hold water. I actually put a system in for somebody and they were at the end of a street on a dead end street. They were in the culdesac on a dead end street, and I told them, I say to you are at the end of the line, a very long line, the water that we took, our French drain system to a culvert.  That culvert went into a city storm water drain and I said, you’re at the end of the line. Everyone’s properties are going to be draining into this system and after really, really big rains, you’re going to have to wait. You’re going to have water pooling in your backyard until it gets caught up. Sure enough, big rain came. I got a phone call, had to remind them of the conversation we had and I had to remind them to be a little patient before I could even get in the truck and drive there. The storm system caught up and the water was quickly evacuated from their property.

The one thing about pump stations and the lift stations that we build, if the power goes out, you’re in trouble. So I tell my homeowners, get a generator, get a natural gas generator so that if that happen…

I do not know all the numbers for this pump station. I can’t tell you how many gallons it’s pushing per hour, per day, but I wanted to shoot this video just so that it really helps people understand where does this water go? How is this water managed? What are the many things that I’m dependent on so that my drainage on my property works properly.

So here’s, here’s a great example. This is really cool. I’ll bore you really quick with, uh, with how it is on the canals around here. You could shoot the canal level, you can shoot the water line and then you go from the back of the house where the boats are kept on the canal to the front of the house. And then you can shoot the level of the waterline in this storm drain catch basin. Well the water line will be two feet lower in the storm drain catch basin in order to drain the street and the properties, they had to put a system in place where the pump station like this controlling it. Literally they, couldn’t tie it into the canals around here because everything would flood right out.

There is pump two.

So when we’re building systems, I literally fly my drone to see where all the waterways go and I do my due diligence so that I can educate my client, prepare them for, you know, the what ifs, you know, we’ll build you a great system, but you know, if the pump station fails and you know there’s not a whole lot any of us can do until that pump stations back up and running again.

For residential and commercial property drainage in southeastern Michigan, give us a call at 248-505-3065.