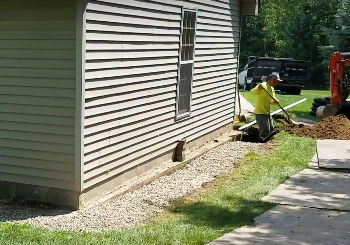 What’s been happening? Water runs down. These are large lots, acres. We have acres here draining.  Water runs downhill, ends up inside this garage. It’ll come up through the cracks of the cement. An open French drain means there’s no sod over top of it. We’re not putting anything over top of it. We took out 20-inches, went ahead and dropped their drainage pipes in. We do burrito wrap it and then just top dress it with stone. Nothing moves water faster and open French drain.

It’s then going to go to a covered drain. There will be grass growing over the part that’s being excavated and this will be taken out the daylight. It’s not going to a storm drain, catch basin or anything like that. We have no infrastructure like that. We’re more out in the country now and we’re just going to take this pipe to where there’s plenty of fall.  It’ll be to daylight where we’ll put a couple of pails of what’s known as riprap; just large limestone so that an animal, little creatures don’t make a home out of the French drain system.

For more information about yard drainage, give us a call at 248-505-3065.  Or, subscribe to the French Drain Man YouTube Channel.