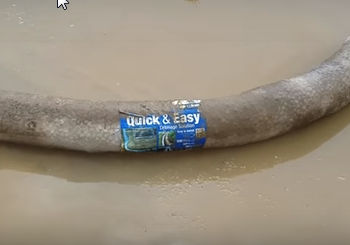 I got a phone call to the office. The homeowner said that there was a drain put in by a contractor, it wasn’t us, and it had floated to the surface of the yard water. And I thought they were crazy. I didn’t know what they were talking about.

So I’m here, the yards flooded and what they put in was the NDS EZ Flow. And it’s buoyant because of the styrofoam. I mean it makes a great life preserver, but it doesn’t make a great French drain. Now I’ve heard of this. I’ve had some contractors, professional grade contractors tell me of certain situations like flooded crawl spaces because of the NDS EZ Flow floating in really, really heavy rain conditions.