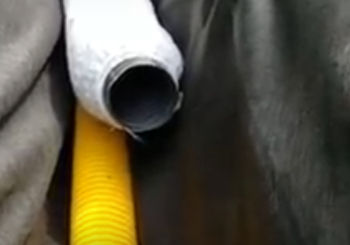 Now let’s go back to EZ Drain. Now they have a segment where they have a gentleman that plays the role of Dr. Drain for NDS, giving you tips. They got a short 46 second video giving tips on how to use this product and in clay like applications and that’s what I’m working with is all clay. Most of our work is done in clay. I’ve had a few odd situations were sand lots didn’t drain. They were saturated and I had a lower the water table. But they said in clay to use the drainage fabric and then you use a permeable backfill.

So isn’t that what we’re doing?

The good thing is they do not make any claims that EZ Drain is better than a French drain, a stone French drain. They actually used words like the French drain alternative. They do advertise that it’s half the work, Now, I will disagree. That’s my professional opinion as well as my crew, but 75 percent of the work is the excavation and getting all the dirt out of the trench and hauled off-site. That’s 75 percent of the work. So I’ll go into this product. Reduces your work by 50 percent. I don’t understand that. They say that they’re poly rock now they’re poly rock. Well, that’s a fancy word for some sort of material. That’s a lot like styrofoam, but I don’t know. Anyways, they claim that it has 30 percent more flow.

So if I were to use easy drain, I would have to put another one on top of this one. Then I’d have to be worried when I backfilled it. Well, and then I’m wrapping it like I’m already wrapping my systems The way they recommend that you put this easy drain in clay is a whole lot like how I build my systems.

Geez. So, and our pipe, you guys, if you watch our videos, you know I’ve done it plenty of previous videos. We have an eight slot, eight cuts per valley, so our, our pipe moves so much water, it’s ridiculous.

I’m going to stick with my stone French drains. If I was working on top of a high rise building and they had a garden on the roof and they needed to do drainage, this would be ideal. I could bring it up in the elevator and I could do drainage on a rooftop.

So again, I don’t want to throw NDS under the bus, I’d use this in the right circumstances, but I’m not going to use it in yards of my clients.