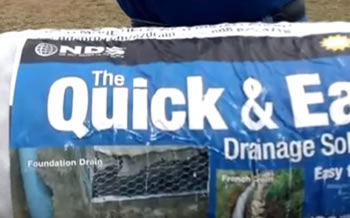 Welcome to the French Drain Man Channel, where we are here to educate the homeowner so they can make a great decision for a quality yard drain system.

This is the EZ-Drain by NDS, and it’s only seven inches. That’s it. That’s all it is seven inches. It’s all its measures. Keep in mind there is a four-inch pipe in here, so there are only three- inches of aggregate. That is it.

We recommend a 14-inch by 14-inch channel of stone. It has a four-inch pipe in it, but that’s more than 300% the aggregate. So they want to say that this poly rock flows 30% better. Okay, well let’s say there, right. Let’s say they’re right, it flows 30% better, but if I have more than 300% gravel or aggregate as they do, they can’t touch it because we do a 14 by 14. Now here’s where it gets really confusing and very interesting. So this system is supposed to move all this water, and I supposed to compete with a gravel drain. We got inside this swimming pool noodle. It doesn’t have very big inlets, and it only has four slots per valley.

Now my YouTube Channel Subscribers are contractors, homeowners. I’ve talked to many of you, very, very smart people, educated. These claims. How has this pipe moving the kind of water they’re claiming, I don’t get it because you could only move the water that this pipe takes in. You’re moving the water as fast as the inlets will allow it.

So let’s go to what I have been showing you guys now for a couple of years at least, and I’ve been doing for a long time. So this is a pipe with eight inlets per valley, and you can see how deep they are. You can see how wide the cut is. This pipe moves eight times the water that pipe that I just showed you do. So I don’t understand where they’re coming up with this stuff.

And then the way I built it with gravel, I’m putting three over 300% the aggregate, I mean is ridiculous — more than 300% of the aggregate. So, if we give them a benefit of the doubt, and what aggregate is there, that little three-inch, don’t forget that there was a four-inch pipe in the middle of a seven-inch Styrofoam French Drain; and then they want to put it, connect it to an inlet basin where if you measure the inside of an inlet based and it’s only three inches, so you choke it down some more. I mean, first, it doesn’t have enough inlet to rip and roar like this pipe, and then you’re going to choke it down to three inches.

That was a Public Service Announcement from the French Drain Man. And I want to say peace to all the contractors and homeowners that want to do it right the first time.