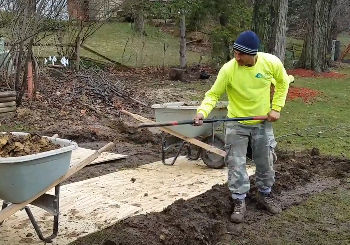 Okay, we’re in Rochester, Michigan.  The homeowner called said that he was having problems with his backyard — the water.  His children couldn’t come out here and play. They would end up getting all wet and muddy, so we designed a French drain system.

The lots behind the street that we’re working on are all much higher.  So, basically, they’re taking on their water as well. This is common to take on water from your neighbors, whether it’s the side or whether it’s you know, behind your lot.

Now the reason why I’m making this video, somebody else had already put in a French drain. Sadly, they didn’t use any stone very little. We’re going to cut this pipe out because it ain’t doing anything. They wrapped fabric around it and poured a little pea stone on it. We came across it in two spots, didn’t even know it was here. There it is again, just some small pea stone around a pipe that actually has the wrong fabric anyways, wrapped around it.  Completely just set up to fail. To be honest, from day one, you have to remove more dirt than that. You have to add a lot of stone. We use a 6A, it’s a coarser rock. We remove a lot of topsoil, dump truck loads, dump truck loads of heavy clay and fill it all in with drainage stone. The more stone, the better the drain. It’s that simple.

Now we are running parallel drains in this yard. The reason for that, basically a French drain will absorb water from three feet on either side of the drain, so we’re three feet off the retaining wall and we measured between trenches. We’re going to dry this yard up with two pipes. This is a gravity system. We did not have to do a pump system. We have the fall, that’s what’s nice. We’re going to gravity feed this right out to the street and we are going to bury a couple of downspouts and we’re just going to put them the popups. We don’t want to tie them into the French drain. We want this to be a contained system.

We don’t want shingle gravel in it. We don’t want leaves in it and basically, this trench is going to continue out to his basin.  There are a good 18 inches of drop. I mean, we have enough slope. We’re going to be able to gravity drain all that water out of here.

So for a French drain that last decades, I really, to this point, after 30 years of building these, I don’t have an expiration on our French drains. They last. They’re built to last. Please give us a call at 248-505-3065. Thank you.