How to Use Corrugated Pipe the Correct Way for Downspouts

How to Use Corrugated Pipe the Correct Way for Downspouts 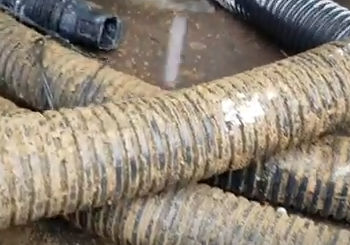 In a lot of my videos, I talk about not leaving a belly underneath walkways. We just took out some corrugated pipe that was single-wall and there’s nothing wrong with the pipe. The problem was who installed it. Now obviously when we remove this, we had to, you know, tear it out. I mean it’s full of organic material from leaves collecting in the bottom. I’ll explain how this happened. It’s not one of my installs. Make that clear. Again, there’s nothing wrong with the pipe. The pipe looks brand new. I mean it’s obviously been in for quite some time. When you fill pipe up like that with organic material, it takes some time for the decay and for the process to actually get to where that pipe at. But I’ll show you where it was at and I’ll explain to you why that happened.

They took a single wall pipe, which there’s nothing wrong with corrugated single wall pipe. The only time it fails is when the installer doesn’t install it correctly.  But this plight went down and then here’s where the problem happened. They dug underneath the walk and then came back up, and when you leave a belly like this, it just acts like a catch basin or sink trap. The exact same things occur.

Now when the water comes down, this gravity-powered downspout. That’s what we have an underground system that’s gravity powered. That’s how we’re moving the water here. We get the velocity moving and it pushes all the debris right out.  With the exception of when it hits a big wall of water. Eventually, the right of weight wins. All this water builds up and then it pushes real slow the water out of the pipe, leaving debris behind in this belly under the walk.

So we went under the walk and stayed low at that level and just kept going and we took it to where we finally we kept sloping is sloping and then we take it to a six-inch catch basin so you can clean out the shingle, gravel, and debris.

So we have smooth wall corrugated pipe after the sweeper. That was a single wall for tricks and tips to underground downspouts and the north and all yard water drainage systems that are built for northern climates subscribe to the French Drain Man YouTube Channel. If you’re looking for this service in Lake Orion or Clarkston, Michigan, give us a call at 248-505-3065.