How to Run a Downspout in a French Drain

How to Run a Downspout in a French Drain 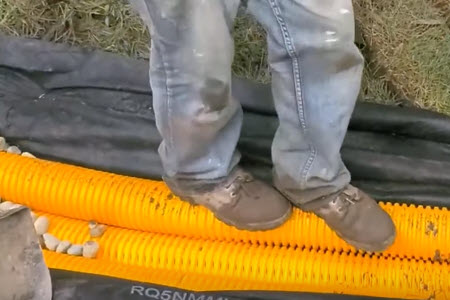 Beautiful, beautiful, beautiful. When Francisco digs and he can feel when he grabs a sprinkler line, that Kubota U17 is really sensitive and it, because it doesn’t have a lot of breakout for us. That’s actually a plus that you could tell when you grab a sprinkler line. So then Marcello and Valentine, they’re there keeping an eye on the ground. They’ll cut it on both ends of the trench. We’ll get everything dugout, we’ll get the fabric in, and then they take a coupler, they pound a coupler in on each side, and then they go ahead and they, they clamp it on each side. So I had a request. They were like, okay, so here’s, here’s the old sprinkler. See? So we just cut it out. When he catches it with the Kubota, there’s a little bit of resistance. And then you know, we can just walk on the Baughman pipe because it’s so heavy-duty, you know? Okay. So, see how they had a coupler, one-inch coupler, and then he’s put it together. Very, very simple.

So as you can see, this is a double barrel. Nice. Look at this. All right. So the triple pipe that is the Baughman solid. We have a lot of clients, they want an all virgin pipe material. You know they want the good stuff for strength for its longevity. None of that recycled restaurant containers and dish, you know, laundry detergent, dish soap, containers, things like that.

Okay. So this is our, the pop-up we like, it doesn’t have much of an overhang so that doesn’t end up broken like the NDS. We have the coupler that we call the Cone, you know, corrugated pipe to a fitting, an SDR fitting that works really nice and that pipe doesn’t have any cuts in it. This, this is not knife cut cause you can mistake it for knife cut cause you can’t even see the knife cuts. Matter of fact, early in the morning in the yard we got to look twice, we got to make sure we’re grabbing the right stuff.

So this is solid, it’s all solid and this is a downspout run and that’s just going to be in the French drain system. Solid. We always isolate and separate the roof water from the French drain system. That’s a blind inlet, guys. That’s what a blind inlet looks like before the stone is put in it. See the guys, they got their, their friend string comes around here and water would sit up in this landscape bed and I told Scott, I would come through here before the guys do the install. I can check it out after a rain. And I saw the water sitting in here. I said, just tunnel under that edging and grab up that water with a blind inlet. The water that gets trapped in that bed area, we’ll run through the stone into the French drain system and the storm drain is down on the far side of the yard.

It looks pretty nice guys. Good work. Sweet. Pretty strong pipe. Nice, Nice, Nice. Another blind inlet. Got the inch and three quarter, so we’ve got two perforated pipes. One solid for the downspouts in this system.