How to Remove Yard Water When French Drains Are Not Allowed

How to remove Yard Water When French Drains Are Not Allowed in St. Clair Shores, MI 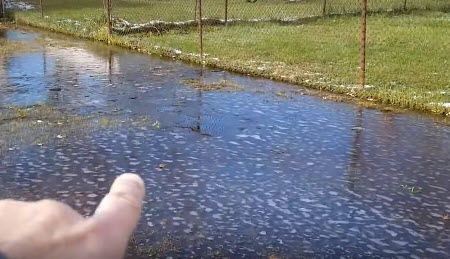 It’s rare to run into this where a city or village will not allow you to run a French drain. If you’re on a lake or a community that’s predominantly on the lake, the worries are you’re going to be trying to drain the lake out and running it to the storm drain, and the system’s going to become overwhelmed with water.

This yard was far enough inland and at an elevation to where there was no threat of draining the lake, so I’m out to help this homeowner. That’s what I do. So I’m going to show you what we ended up doing to satisfy the building department. I believe every man has the right to protect his castle and as you know, we’re here to help the homeowners. Whether you’re a DIY or whether you’re hiring this out, this is what you can do so that you can rid yourself of looking at all that water. It’s just crazy.

This gentleman has a sump pump line over here that has to run out to that yard that’s just going to add to that.

Okay. We’re here in St Clair Shores, Michigan, putting in a French drain grid. Also, this sump line use to run out the front of the house, and it would ice up the sidewalk. So we changed that. We had to get bonded with , which is no big deal. We’re starting to do a lot of work down here.

So there is a really old infrastructure, two doors down. So we went across two yards. We had to get signatures; people had to sign off that we could cross their property and that there was going to be a pipe. We went with schedule 40 because, in Saint Clair shores, people are allowed to keep a boat on a trailer in their yard. I don’t want somebody putting a heavy fiberglass boat and parking it on the drain and compromising it. So we went with schedule 40. And you know how I like the deep bells. This is a great belled end here. I love this. It’s crazy deep. I don’t have to worry about that coming apart. It’s going to catch all kinds of stress from the freezing and thaw. I’m not worried about that coming apart. Plus we always use some good PVC cement or weld.

Now everybody around this gentleman filled their yard over the years. So that’s how he inherited so much water.

All right, so I’m just going to explain what this is all about. That’s Baughman. That’s a few feet of solid, and I’m going to tell you what we’re doing and why we’re doing it. You know, I hate these things. St Clair Shores does not allow French drains. Can you believe that? I mean, can you believe that? I can tell you my opinion. Why in the Shores they were built way too low. You know, it was built on swampland, but it’s right, right by the water. So right now if you dig a trench in Saint Clair Shores, it’s going to fill up water. They don’t want the storm drains overwhelmed with subsurface water. That’s just coming from Lake St Clair. You’re just going to overwhelm the little bit of infrastructure they have here because they don’t have much.

So the inspector came out and told us we couldn’t put it in a French drain. So we’re just hooking solid pipe off of our Baughman High Octane. And we’re putting a dummy basin in just to let the inspector do what he’s supposed to do. He can come back here, see that there are just some inlet basins. They allow what they call a rear yard drain, which is surface water only, no subsurface water. So I believe that every man has the right to protect his castle and with what this guy has been living with. Yeah. So here we are.

That’s the story on that. But as you can see, Scott’s not screwing around over here he’s got, now we’re getting our hands on what’s known as an inch and three-quarter cobble — moving a lot of water, moving a lot of water. So remember what a French drain grid is. We have a line here. We got a line here. Valentin already placed the sod back on half of that line. The guys are working their way out. I mean these guys work methodically. It is just crazy. And the sump line is going to tie in too. So we’re going to get all the water out of here, and this guy’s going to get his backyard back. Even though the neighbors, they all brought in the dirt.  Look, look at the bottom of the fence right there. Okay, this is how this goes. Isn’t that crazy? I mean there’s dirt right to there.

So you know, there’s this constant battle where everybody’s bringing dirt in, and at some point, somebody’s got to say, you know what? You know, I’m just going to put a drain in and get all our water evacuated out of here. So, and that’s what this guy did. This, this guy stand up guy. His neighbors should applaud. I mean he’s putting up the money to basically drain instead of coming in here and bringing 60 yards of dirt and now everybody’s back on that again. And then eventually what happens? The fences look about three feet tall, and they are heading that way already. So, no, I’m really happy with what the guys have done here. And uh, yeah, that drain. So we had to go through this yard into the corner of this yard and tap into some, some crazy old infrastructure.