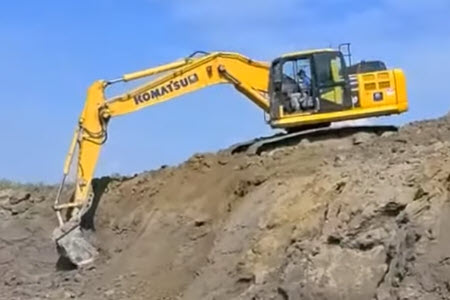 We now have enough ground opened up. We have more ground opened up right now. This is larger than most ponds for sure. That’s just this addition itself, let alone the three acres that we’re going to be connecting this to when we go through that dam over there.

Know that 99 out of a hundred ponds are borrowing pits. That’s what we refer to them as. We needed to borrow the dirt for roads, drainage issues, having to elevate grade. If you have the property, it’s not a bad idea to take a pond. It produces some really, really nice material, really clean material, just absolutely love it.

The two tools that are most important, I wouldn’t play around. That’s a D7 bulldozer. I like to run that and this is about as small of a hydraulic shovel as I’d recommend. That I would actually bump that up a little in most cases. But my name was on a waiting list for a few weeks and I said, you know what? We’ll get it done. We’ll get it done. So that one has a 32-foot arm, 32 -feet of reach out front. I think we’re getting like around 1718 feet deep, which is good because we’re already at the lowest elevation of this property. Beautiful material. Beautiful material.

All right guys. Learn from the veterans.

Now the groundwater started coming in from what we dug. We got here today and we just started moving a lot of ground.

So notice big water projects. They have something in common with even something as small as yard drains. You leave a dam so you’re not dealing with the water. Now sure, the water’s coming up. I mean water’s coming up. I get it. We get here tomorrow. This will be full of water too. The waters, the waters coming up. It’s everywhere. But we’re working our way out of here. I want to get out of this big hole before the weather’s gone south on us. We got shorter days. We’re losing like two minutes a day. So that’s like 15 minutes a week. The days are getting shorter, the temperatures are getting colder. And the frequency of rain is going to increase substantially. So we’re working around the clock, we’re doing 12 hours shifts. I’m running this hydraulic shovel or that blade that Marcello’s or whatever’s needed. I like that D7 a whole lot. So I’ll run the night shift while these guys hammer away during the day and go home to their wife and kids. And like I said, what machine I get in and what I do, it’s where I’m needed most.

You can say that two guys are handling this project, so to dig a pine you need a minimum of two guys and the two pieces of equipment that you see here.

Most of it is just common sense. It really is, and I wish I could glamorize it for you guys, but it’s just a whole lot of digging. That’s all I can say. Just a lot of dirt, which we badly need for a road we’re putting in and we’re elevating the road to keep the water from coming into this farm and flooding this property. It’s got a history of doing it. Do you know? I always say those 100-year rains that seem to come every third year. But we’re finally plugging the hole in the dike, so to speak.

This going to end up being a pretty big, I mean, five acres is when you’re technically into a lake and it will be a lake. But we’ll call it a pond because of the, uh, all the hoops you have to jump through.