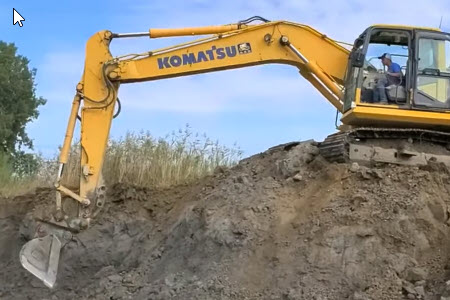 Keep in mind when building a pond that the two pieces of equipment that you are going to need and they’re going to be running the whole time. You want a pretty big backhoe. This one had 32 feet of reach. I’m not positive on, I think we were about 17 to 18 feet deep with this and that was like max. We had a D7 bulldozer pushing all this dirt out of the way.

I highly recommend that if you’re going to do a pond, whether you’re a contractor or a homeowner, a lot of people move out to the country, find out that they need a lot of fill. The builder usually doesn’t tell you until you’re well on your way of building this house and you find out the price for hauling that dirt in and your jaw just drops in your lap. You can rent this equipment, end up with a pond, you know, use the pond as a borrowing pit. Get that dirt that you need. I mean, this is really clean material. This is great material for raising and elevating a grade and that’s what we’re doing. We’re building a road and on this farm, there’s a low area that’s just perfect for a pond. It holds water year-round. It doesn’t really drop that much. We did wait for the drought season. We wanted July and August to drop the pond as low as it would. The water table, we were trying to get to the point where we can dig and not have this hole filling with water. So that’s the point. We waited through July and August patiently and then jumped on this in September. That’s what we did.

I hate running pumps, can’t stand dealing with pumps. It’s just the pain. And if anybody, any contractor who has ever dug a pond is watching this, they know, they know exactly what I’m talking about.

Not only do you get to rent a big pump commercial pump, usually at that, and then you always got to keep fuel in it. You’ve got to set your alarm, go out on the job site, gas it up in the middle of the night so that when you go back to dig, the holes not full of water. So we’re doing this methodically. I’m telling you all summer long, this is, this job was on the books.

We got D7 here and I’m running it at night. I’m running the night shift because the race is on. We waited for the water table to drop as low as it was going to go, and guess what? The temperatures are going south. We have precipitation in the forecast and we need to move and handle 30,000 yards of dirt on this project.

A good designer and engineer will know wherever you’re going to be borrowing your dirt, that’s where you need to put, say, an agricultural driveway, things like that. You want to short-haul route, real short-haul haul route on this job. It’s been kind of cool. We’re just pushing dirt with a big D7 dozer. If we had to move dirt farther, we would’ve rented an off-road truck and that gets to be, you know, you’re running in the money, the further you move that dirt. So you have to methodically lay it out on your property. You might say, hey, I want to put the pond right there, but it might be high ground so it won’t stay full of water all through the summer. And that’s not an ideal place and it might be too far in a haul. Really think about this. When you layout your house everything’s gotta be methodically done.

So here we’ve made a lot of progress and we’re opening up a lot of ground here showing you what we got done just from working 12-hour shifts day and night. We just want to knock this out,

We’re building an addition to a pond because we needed the dirt. It’s a pretty popular thing, you know, it’s kind of like when you’re on the freeway or the highway, why do you think there’s a man-made body of water by the on or off-ramp? You know, they needed the dirt.

Last night on my shift, I got down in the pond with the D7. Marcello’s running the D7 right there. I cut this bank way down so that Francisco can get on this, on this bank and keep digging on this pond.

This is the property line. Here, I’ll show you. You can see the stake goes straight, the corners right there, and then it goes straight. So this pond is called the corner pond for that very reason. It’s in the corner of this property. Now there is a river probably a half-mile. And when it jumps it’s bank it used to flood this farm. So the property owner described to me what was going on. Well this elevation in this field was really low. So my recommendations, here’s the peak, there’s some good, real good elevation there. So my recommendations build a dirt dam that is a road. So now you can access for hunting, fishing, and just walking. You know, just enjoying the country. This is going to be a really nice road and it’s going to keep the water from breaching this farm here.

Okay, so guys, when you’re digging a pond, how to, man, I hate running pumps. I hate handling pumps. I really do. I mean it just sucks dragging all that fricking suction line and moving heavy, heavy pumps around. So July, August is our drought season here in the north. You let the groundwater get as low as it’s gonna get and you want to jump on digging a hole at that time. So it’s September, we dug this. You can see the groundwater’s filling it, filling it in. But we’re working our way out of this pond. So that’s what you want to do. If you tried to do this early in the year or late in the year when there’s a lot of rain you’re going to handle, you’re going to be handling pumps a lot. And that really sucks. So far so good. We haven’t had to pump anything if it’s working as planned.

Now, this bank here is really steep. Last night I was getting on it and I was trying to cut this vertical bank and give it a nice, well it started raining so I got off that bank and I decided that’s going to have to be good enough. Pretty greasy over here because of the rain. But I was able to cut this back. And now Francisco he’s working on well, making more dirt and you know, as a bonus to the property owner, this pond is going to get blown right out. Now we kept the dirt dam in place. We haven’t broken that yet.

Now we still have our dirt dam in place. What’s going to end up happening is once we get out of this hole and it’s coming, it’s coming. Today’s the last day in this hole. With the rainy season bearing down on us and our temperatures going south. Man, I couldn’t be happier and I won’t rest until something like this is knocked out because I know if the weather turns against you, how ugly a job like this can get working big dirt. It goes to hell fast when it’s cold and wet.

All right, so once we get out of this hole, we’re going to break this dam, we’re going to flood new addition to this pond and that’s going to lower the level of the pond. And then we’re going to dredge the pond all the way around the pond, and we’re going to just pile that dirt up and make a nice driveway. And also, you know, create a dam. So none of that floodwater enters this farm.

You always want to work smart, you don’t want to double handle dirt if you don’t have to. And if we’re moving this dirt far, we would have rented some off-road trucks if the dirt was going to be repurposed a far distance away from this hole. This was here by design. We needed the dirt over here. So Marcello’s taking the D7 and he’s continuing to push that berm out that way.