How to Dig a Canal

How to Dig a Canal 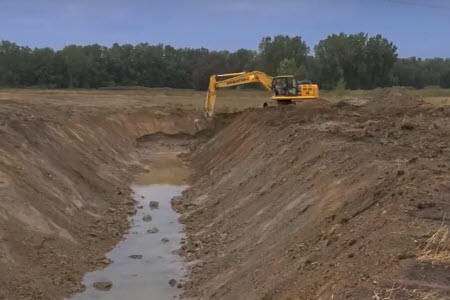 We’ve been digging a canal. It’s coming along really nice. My shift is over. I’ve been working the night shift now Francisco’s back in the excavator. He’s swinging it over there, cutting a nice bank on the canal. This is going to be a really nice addition to this property.

We needed dirt for a driveway and this is how things are done in the thumb of Michigan. It’s pretty flat. It’s actually extremely flat and if you want a driveway that’s high and dry, you got to make the dirt. So usually put the driveway wherever you need a drainage canal. This here is going to be really nice. We went deep enough to where you won’t end up with a bunch of cattails and you know aquatic weeds. It’s filling up with water, which is great. You know, we, we put this canal at the lowest point, the lowest elevation of the property. Just kind of followed that. It gave it like a really cool meander so you know, that was the benefits to that and the driveway is going to be just banging high and dry. They’ll be able to get to where they never got before.

Now, this bank here is coming along really nice. This one still needs to be cut back a little bit. Just from a safety standpoint. You know you don’t want any steeper than one to three and what that means is for every three feet of slope you want one foot of drop. Okay? So that’s a three to one or one to three. And that’s what we’re doing. We’re cutting this bank to a one to three.

Winters coming and we have to get as much dirt moved as we can before the rain picks up. And you know it’s late September and this is about it. This is the last call for moving big dirt. It’s going to start raining more frequently and our temperatures are going away. Tomorrow is going to be like 69 degrees. So what happens is when the rain picks up and the temperatures go away there, dirt doesn’t dry anymore. So you can’t grade it, you can’t work it. Only a fool moves mud because it costs twice as much to only get a third of the work done. And yeah, I speak from experience. There was a day where I was, you know, let’s face it, young full of testosterone and even weather and mud wasn’t going to stop me, but trust me, learn from my experiences. It was pointless. Look at that. That’s coming along. Really nice. Beautiful canal. Beautiful.